Fantastic Fest 2016 Review: FAULTLESS, The Sting of a Woman 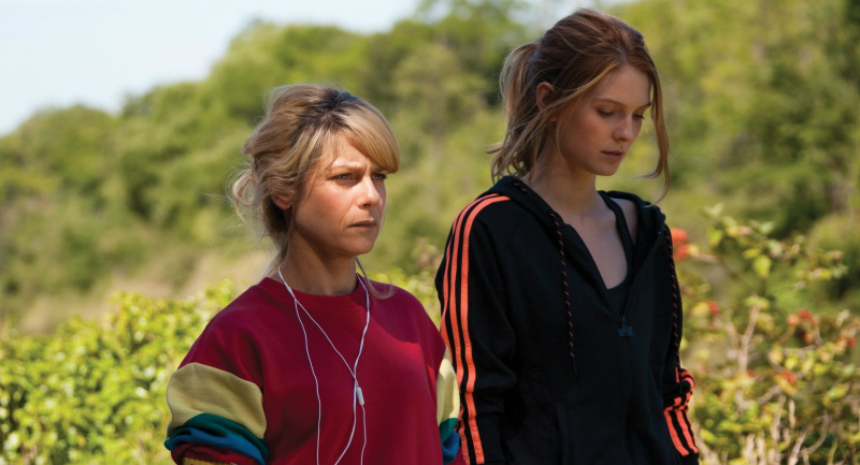 What do men know about women? According to Faultless (original title: Irréprochable), some women are beyond understanding.

Directed by Sébastien Marnier, the film follows Constance (Marina Foïs) as she slinks back to her hometown in rural France after losing her job as a real estate agent in Paris. She presents a self-confident, brassy attitude as she begins looking up her old friends, only to be met with universal scorn for daring to show her face again. It seems that she did not depart on the best of terms with anyone, not only burning her bridges but throwing the ashes on the faces of her former workmates and lovers.

Constance is a firm, determined woman, entering middle age without any real prospects. She tells everyone that she's come home to look after her aged mother, but she pays only token visits to see her in a care facility, and it doesn't seem to affect her life at all. She tries to get back her old job at a real estate agency, but fails utterly on her "job interview" and learns that instead a young woman named Audrey (Joséphine Japy) has snared the open position.

With her funds running low -- she's forced to live in her family's former house, with no electricity or other utilities -- Constance begins spending time with Audrey. She starts on a very friendly note, scheming carefully so she can pretend to run into her casually, and quickly building a friendship with the lonely Audrey. For her part, Audrey is already feeling overwhelmed by her first paying job; she is also torn by her family and by her love for her boyfriend, who is now in Russia and pressuring her to make big decisions quickly.

Constance is also busy resuming a relationship with an old beau, Philippe (Jérémie Elkaïm), though he's initially bitter and resentful about the way she ended things when she abruptly accepted a job offer in Paris. Simultaneously, Constance is carrying on an affair with a married man that revolves almost entirely around sex.

Even without a job, Constance is quite busy! Throughout all of her affairs, it becomes clear that she's a bit off. She's capricious and spiteful and entirely selfish. She's putting her needs first, but without any thought for how her actions affect others -- which is why her return met with such resistance at first sight. Is she made to suffer because she's a strong woman? Or because she's so often disagreeable and thoughtless?

Marina Foïs gives a nicely layered performance, capturing the bristling emotions of Constance, who often comes across like a freight train. She is who she is, and never makes any apologies for her behavior. That can be very seductive, and to a certain degree, it's understandable why men fall at her feet and women accept her beguiling offers of friendship.

Constance is a duplicitous character, yet some of her actions feel captive to a male viewpoint on her behavior. Her motivations remain murky; if she's a budding psychopath, how did she get that way?

Faultless is more interested in letting loose an angry bee upon a flock of dozing sheep. As she stings and stings away, Constance is never concerned about what happens to others. They stumble and fall; she flies away to sting another day.

The film screened today at Fantastic Fest. It will have another screening on Tuesday, September 27.

Do you feel this content is inappropriate or infringes upon your rights? Click here to report it, or see our DMCA policy.
Fantastic Fest 2016FranceMarina FoïsSébastien Marnier