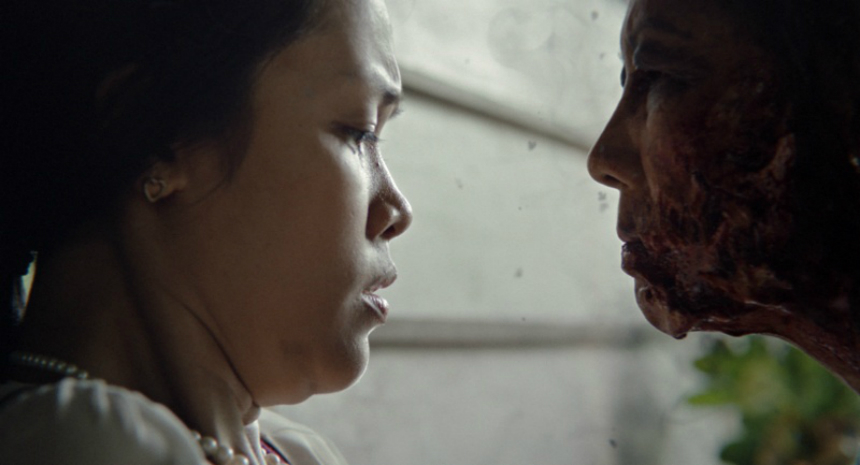 With only her second film as director, Mattie Do takes a big step forward, both for herself as an artist and for Laos as a filmmaking community.

Do broke ground with Chantaly, her debut as a filmmaker and also the first horror movie ever produced in the country. As with her first effort, Dearest Sister focuses closely on its characters rather than bloodletting or rollercoaster thrills; the pace is measured and deliberate and even more involving this time around.

The atmosphere is built slowly, revealed through the eyes of naive country girl Nok (Amphaiphun Phommapunya, also the lead in Chantaly), who is sent by her family to help Ana (Vilouna Phetmany), a distant cousin in the city who is slowly going blind. Ana needs the assistance, but initially resents Nok because it was her European husband Jakob (Tambet Tuisk) who arranged things. Jakob is busy and often away from home on business, running an NGO, and the arrangement seems more designed to assuage his guilty conscience for not being home than it is for Ana's benefit.

For her part, Nok begins as a passive observer of the rocky relationship between Jakob and Ana. She tries to help out around the house, but Ana, being of the wealthier class thanks to Jakob, reminds her 'that's why we have a maid.' The maid (Manivanh Boulom) and her husband, the gardener (Yannawoutthi Chanthalungsy), are well aware of the class distinction -- they must sleep in a covered shelter outside the house, for one thing -- and are quietly resentful of their employers. Thus, because Nok is given a room inside the house by Jakob, the maid and the gardener resent her too.

And really, Nok is only present because her family back home needs money. But on her first payday, instead of sending her earnings home as expected by everyone, Nok spends the money on herself. So the naive country girl is revealed to have her own desires and ambitions, and is far from the mouse that her new circle of acquaintances think her to be.

As with Chantaly, the genre elements are sprinkled in sparingly at first. Ana is plagued with visions of spirits that hover in the midst of her near-blindness; it's not enough to paralyze her completely, but it makes her reluctant to leave her comfortable home. That's one reason Nok has been brought to help out, though once Nok realizes that the numbers Ana subconsciously repeats after her encounters with the spirits can benefit her financially -- hint: the lottery! -- the various resentments and frustrations felt by nearly every character begin to bleed out into an unholy mess.

Dearest Sister might be described as an art house film that's in touch with its inner demons. It simmers along with the characters; as things become more heated between everyone, so does the buzz that spreads from mind to heart to spirit.

Building on a persuasive original script by Christopher Larsen, director Mattie Do keeps the temperature rising with a greater variety of emotions and motivations than in Chantaly, resulting in a discomfiting movie that has an even greater, deeply moving impact.

The film enjoyed its world premiere at Fantastic Fest tonight. It will screen again on Thursday, September 29.

Do you feel this content is inappropriate or infringes upon your rights? Click here to report it, or see our DMCA policy.
Amphaiphun PhommapunyaFantastic Fest 2016LaosMattie Do