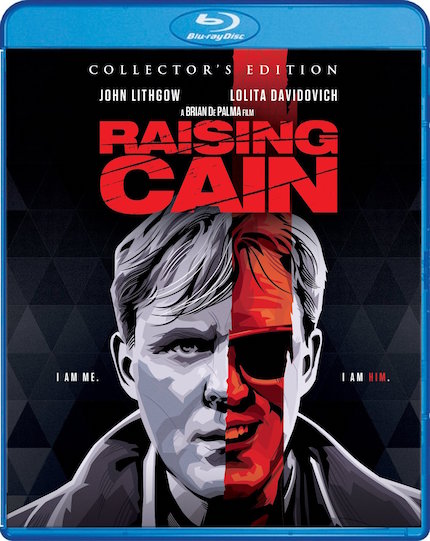 Raising Cain is a film that had me screaming at the drive-in along with a friend in 1992 (yes drive-ins still existed then, and still do). John Lithgow's portrayal of Dr. Carter Nix and all his varied personalities and roles (Cain, Josh, Margo, and Dr. Nix) had me thoroughly freaked out as a much younger person under Brian De Palma's (Carrie, Scarface) direction.

"When Jenny cheated on her husband, he didn't just leave... he split."

The film's logline is funny, but also problematic in its misogyny. As a journalist and writer who appreciates puns, I find it hilarious. But as a female, it makes me roll my eyes that a woman can be blamed for a man's utter psychosis.

Anyway, the plot is that Jenny and Carter have the perfect marriage on the outside, but he's secretly been getting weirder and weirder. Jenny reconnects with her ex Jack (Steven Bauer) under not-so-moral circumstances and then everything kinda hits the fan. Kids and parents alike go missing, and Carter does some very bad things with the aid of Cain, his tough guy personality. What results is a Hitchcockian thriller that's really fun to watch.

De Palma's love letter to Alfred Hitchcock swings a little cheesy at times when there's romance onscreen (soft focus close-ups), but that nearly five-minute tracking shot down several stories --- as well as the camera movement and framing during the finale --- well, that kind of cinema is as delicious as they come. Thank you, Stephen H. Burum (cinematographer on this film).

Pino Donaggio's score is also an homage to Bernard Herrmann (perhaps best known as Hitchcock's composer on Psycho, North by Northwest, and Vertigo, among others), with its dramatic crescendos and waves of urgency. (Donaggio also worked with De Palma on Carrie, Body Double, and Dressed to Kill)

There are two video essays on that topic on the second disc, which is the Director's Cut. I'm not sure why they were split up, as the first one is only about five minutes long; combining them would have worked well.

Audio and visual quality are good, although the picture could be brighter and I did notice some moderate flickering. This didn't really distract me from enjoying the film, however.

For De Palma fans, this one comes recommended. It's out today via Scream Factory. Check out the trailer below.

Do you feel this content is inappropriate or infringes upon your rights? Click here to report it, or see our DMCA policy.
brian depalmaJohn LithgowRaising CainShout Factory