Adriana Leonard is a Female in a Woman’s World 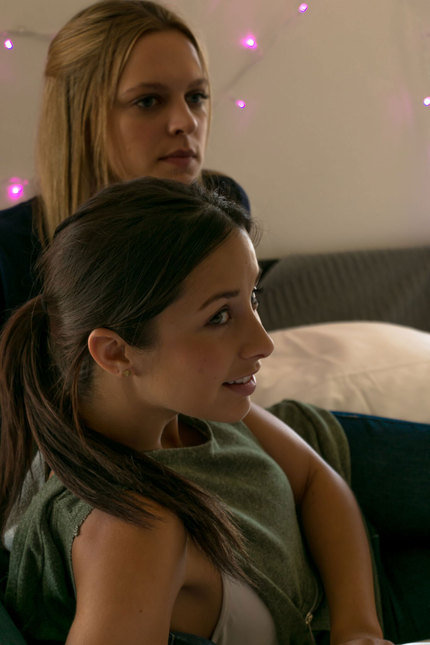 Actress/Writer/Producer heads to therapy with “Signing Out”

In the new short film, Signing Out, Adriana Leonard plays a young woman trying to get over a failed relationship only to discover that she and her ex-girlfriend are seeing the same therapist. Co-written by Leonard and Jenna Michno (who plays her ex), the film was directed by Dana Brawer, featuring an all-female cast and nearly-all-female crew: Leonard also co-executive produced Signing Out alongside Jett McCandless. Brawer edited the project; she and Michno are producers on the film, while Madeline Berger was the Director of Photography.

“In full disclosure, a few members of our crew were guys,” Leonard says, “but what drove me was a desire to make art that casts visibility on the issue of gender equality.” Hence, the female protagonists. Their relationship - and the film - is driven by the characters’ personalities, not their orientation. Since hitting the festival circuit in June, Signing Out has garnered strong response, screening as an Official Selection at the Female Eye Film Festival (FeFF), Long Beach International Film Festival and Kansas City Fringe Fest.

“People from the LGBT community consistently tell us how refreshing it is to see a love story about two women that doesn’t turn on the fact that it’s a lesbian romance,” Leonard observes. “In terms of it being a ‘girls’ show’, the simple fact is that, while women have come a long way in the industry, this remains a topic of discussion. There are very strong voices both in the film and spot world, keeping related issues at the fore.” As a commercial actress, Leonard has appeared in campaigns for Applebee's (via Crispin Porter + Bogusky, directed by Anders Hallberg) and Level 257 (via Maclyn Group, directed by Jay Paonessa), among other projects. She next appears in Bruce Beresford’s Mr. Church, starring Eddie Murphy, and in Cross 2, starring Danny Trejo and directed by Patrick Durham.

Leonard, who was born in South Carolina, graduated from that state’s USC with a BA in Theatre & PR. Her theatrical aspirations manifested early and never wavered. “In my high school evaluation when they asked ‘Career option,’ I said, ‘Actor’,” she recalls. “They kept putting it under hobby and I kept saying ‘Career!’”. As a young child, apart from knowing she was going to be an actor, Leonard muses, “I also thought I’d be the first female President. Because why not? I had things to say and I wanted to help people. However, in my adult life, the more I’m exposed to the resistance and backlash to which women are subjected when seeking to make strides towards parity, the more cognizant I become of how my individual experiences may have been altered because I am a female and I look a certain way.”

During her college years, Leonard studied theatre at Regents College in London, training with a variety of instructors over varied techniques, making her extensive theatre resume possible. Leonard’s lifelong passion for dance and acting came together when she got her start on ABC Family in “A Cinderella Story” and on CW’s pilot “Heart of Dixie.” In 2014, she produced and acted in the feature film Camouflage, addressing the issues of mental illness and bullying. Leonard funded that film entirely via Kickstarter.

She acknowledges that today’s content landscape is a double-edged sword. “The myriad opportunities for us as actors to create our own content is overwhelming,” she says. “We don’t have to sit around waiting for work to come to us anymore! And as creatives with bursting imaginations, how cool is that? It’s also terrifying. Competition’s increased as the game has changed. But it’s good, I always work better under high stakes, anyway. Anything is possible, and that hope, that desire, is what keeps me going.”

With Signing Out making the rounds, Leonard is now at work on a feature-length screenplay. She won’t say whether the next film will be set in a “a woman’s world”. “There are plenty of talented men that I admire and look up to and want to work with,” Leonard concludes with a smile, “but sometimes it’s just about finding the person who is best for the job. And for Signing Out, the best people just happened to be female.”

Signing Out Teaser Trailer from Dana Brawer on Vimeo.

Do you feel this content is inappropriate or infringes upon your rights? Click here to report it, or see our DMCA policy.
adriana leonardgender equalityindie filmindie filmmaking