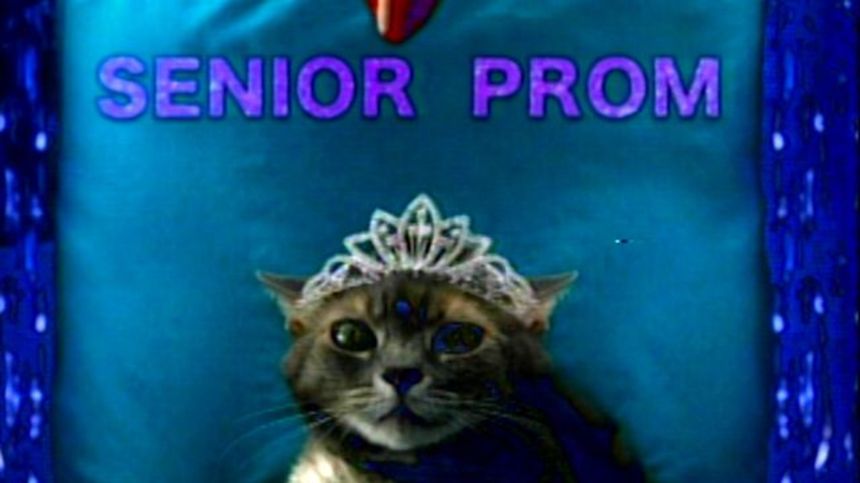 So, what do you want from a weird, sketchy, indie genre film?

How about a cool backstory, where the director (Michael Reich) supposedly funded the film in part by being a Daft Punk body double? Or how about mixing pop culture esoterica, from the Bruce Campbell classic Congo to an all feline version of Carrie, all smashed together with the aesthetic of a mid-80s music video? You’re going to get something you really like, or something that feels tedious, indulgent and downright irritating.

Charitably, one can sense that She’s Allergic to Cats at least feigns trying to provide narrative coherence, with dog groomer Michael (Michael Pinkney) living in a Los Angele apartment inundated by rats, only to be inspired to rid the vermin by an introduction to Cora (Sonja Kinski), who he wants to invite over to entertain.

The film liberally employs the kind of grungy video effects that made the Wayne’s World title sequence comedic, a grimy looking feedback loop of chroma noise and optical distortion.  One can see they’re going for the spent aesthetic of a Guy Maddin, with a soiled vision commensurate with the ennui of the central characters.

The film’s saving grace is that the masturbatory madness lasts a mere 74 minutes, yet it feels much longer. The punchline of the joke lies in the title, and one can’t help but simply wait for the shoe to fall as the absurdity gives way to mediocre plotting.

Ramshackle and repellant, the film feels like a student film gone awry. There’s attempts at crafting lasting images, from naked, rat-covered leads to slow-motion puppy cleansing, that I’m sure may titillate lovers of late period Godard or those enamoured with bad-for-bad’s sake. For this viewer, the spray being shot at the lens was not artistically resonant but was simply the stuff squeezed out of the shaved asses of those dogs, something perhaps satisfying to the people in front of the camera, but less cathartic for those actually watching what’s taking place.

Certainly this isn’t a film that’s going to find a mainstream audience, nor is it a filmmaker looking to have universal acclaim. For some surely this madness will be satisfying, somehow a tonic from the generic and the pedestrian. For me the most frustrating part is that it was all so predictably dour, so needlessly and grindingly awful that it lost any sense of being genuine and instead came across as pure, unadulterated indulgence, the stuff a bunch of stoner friends would gather to see as the product of their weekend fun. It’s a film that surely doesn’t’ take itself too seriously, so I’m not exactly sure why I should either.

She’s Allergic to Cats ruins a fun little idea by never actually exploring the world it creates, leaving it to the audience to care about unappealing characters and unattractive situations. I’d watch the hell out of an all-cats Carrie, but slo-mo bucket falls and video superimposition isn’t going to cut it. The film has sparks of originality and fun that quickly get stomped down by its unrelenting mediocrity, and save for the truly brave or masochistic, this isn’t a film that you’re going to need to go out of your way to seek out. Of course, there are many who want to watch shit films for shit's sake, so for them I say enjoy, indulge in lapping up the assjuice all you like. Just don’t try and convince others it’s champagne.