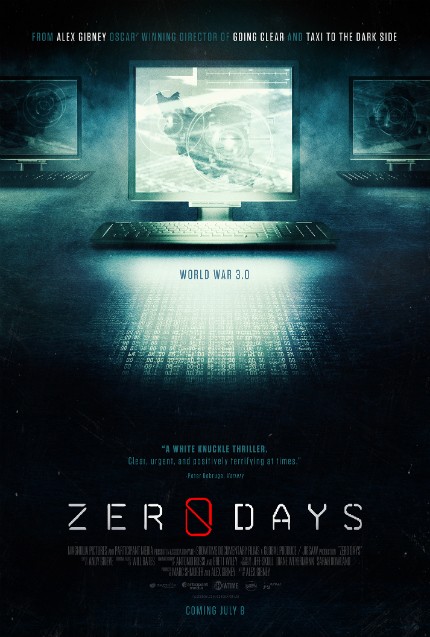 Sometimes the best documentaries are thrillers.

Zero Days, the latest non-fiction entry from director Alex Gibney (he of Going Clear fame) begins just the way you'd want an edgy, cloak-and-dagger tale of political intrigue to begin; a figure, obscured in shadow, speaks to us through a digital filter, painting a picture of a new kind of global warfare in broad strokes. When a voice (presumably Gibney's) asks our mystery man about "Stuxnet" (a malignant computer worm that is, in many ways, the protagonist of the film), the shadow pauses for just a moment before offering no comment.

Thus begins a deeply fascinating and troubling tale of cyber-espionage run amok, and one that leaves its audience sitting with a strange afterglow that is equal parts electrifying excitement and existential dread. The subject matter here is dense with a capital "D," but Gibney's skills as storyteller shine within the nonfiction format.

Zero Days is divided into several narrative chunks to help the viewer process all of the information flying at them. Editor Andy Grieve and co-editor Hannah Vanderlan deserve an enormous amount of praise and recognition for elegantly solving a Herculean problem: how to cram in all of the geopolitical context and technical exposition necessary to fully comprehend the gravity of Zero Days' subject matter while still keeping the audience awake, much less enthralled?

The film begins with the discovery of the Stuxnet worm by European malware experts and its subsequent analysis, and from there moves seamlessly into a detailing of the historical machinations that led to the formation of such a thing in the first place (without giving too much away, shadowy agencies -- the likes of the CIA, Mossad, and the NSA -- figure heavily into everything) before postulating as to the potential fallout of this new crop of "cyberweapons."

It's a daring narrative device that pays off in spades; who exactly might be behind Stuxnet becomes something of a red herring as the film explores the more fascinating questions of "how" and "why." It would be tedious and verging on spoiler-territory to get too deep into plot summary, but suffice it to say that Zero Days eventually winds its way around to a fascinating question: what might be at stake when the weapons of tomorrow do not even exist within the material world?

Likewise, the attendant questions surrounding accountability and transparency also figure into the takeaway of Zero Days, in a manner that might have threatened to sprawl in the hands of a less accomplished director, but that is visited to a tantalizing and pitch-perfect effect by Gibney. As the documentary unfolds, interviews with politicians, intelligence experts, computer gurus, and one very interesting "Deep Throat"-type character help set the stage and develop the world of the film in a way that allows the viewer to comfortably engage with the altogether troubling (and somewhat complicated) content.

As more than one talking head notes, the very existence of Stuxnet -- a malignant worm that attacks mechanical systems and infrastructure with ruthless anonymity -- may be troubling, but to live in a reality where such a thing even exists is, as the old proverb goes, to live in interesting times.

This film is about a lot of things, but what makes it truly relatable to the average filmgoer are the concerns it raises over how citizens and governments conduct themselves in a world that is paradoxically growing more and more open, yet more and more opaque. Our lives are lived online to an ever-growing degree, and the potential fallout of all that growth with little to no regulation or stabilization is highlighted by Zero Days with frightening clarity.

Zero Days will be released in theaters, on Demand, on Amazon Video, and on iTunes on Friday, July 8, 2016, via Magnolia Pictures, Participant Media and Showtime.

Do you feel this content is inappropriate or infringes upon your rights? Click here to report it, or see our DMCA policy.
Alex GibneyDocumentaryZero DaysDavid SangerEmad KiyaeiEric ChienLiam O'Murchu