Review: TRAIN TO BUSAN Rides the Rails With the Undead 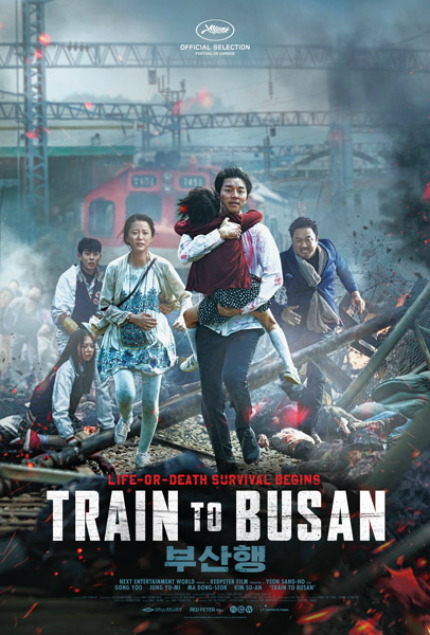 For his live-action debut Train to Busan, indie animation director Yeon Sang-ho, whose films The King of Pigs and The Fake have drawn international acclaim, has taken the zombie thriller, stuck it into the claustrophobic confines of a train, and taken aim at Korea's government and its hierarchical divides. A tense and inventive mix of genre thrills and social anxiety, Train to Busan is a Korean blockbuster with an unusually clear focus.

Successful fund manager Seok-woo lives with his daughter in Seoul but leaves her rearing in the hands of his mother at home. For her birthday, she wants to visit her mother, his ex-wife, in the southern port city of Busan. The next day they board an express train south and just as it begins to pull out of the station, a hoard of zombies descends on Seoul Station. A recently infected girl has made it onto the train and mere minutes later the hurtling wagons are plunged into chaos.

Much like Bong Joon-ho's Snowpiercer, Train to Busan squeezes a divided social spectrum into the microcosm of a train. The characters are varied, but essentially fall into three categories: the general population in second class who look out for each other during the crisis; the wealthier first-class ticket holders who look out for themselves; and the workers on board. The most loathsome character is a middle-aged business owner played by Kim Eui-sung, who has no qualms about throwing people under the bus (or train) in order to preserve himself. He runs an express bus company, a very specific occupation that brings to mind the ferry company that has been roundly condemned for cutting corners and allowing for the Sewol Ferry disaster to happen two years ago.

The Sewol Tragedy is alluded to a few times over the course of the narrative, particularly as the train riders watch government reports on the news that are blatantly misrepresenting the facts on the ground. One can also sense a commentary when one of the train's employees blindly begins to follow the CEO's orders, falling in line with what he sees as the authority.

Zombie and gore fans should note that Train to Busan is a comparatively tame affair that tones down the blood and guts in a bid to appeal to a wide audience at home. While many characters die and Yeon does whip up terror through the quick escalation of the outbreak, the novelty in his film has more to do with his use of the enclosed and perpetually moving space than new, graphic ways of dispatching the undead.

Visually, Yeon takes the zombie hoard and portrays it almost like a wave. Individual zombies, though very fast, pose little threat by themselves, but in large numbers they pile into locations, falling in streams over ledges and through holes and building on top of each other whenever an obstacle gets in the way. Coupled with the motion of the train, this creates some memorable visuals within the cars.

In the lead, handsome star Gong Yoo fails to add anything to his character. Admittedly, it's a typical role of a man more concerned with work than his family who eventually sees the error in his ways, but Gong's gormless portrayal makes Seok-woo the least interesting thing in the narrative. Already mentioned, the CEO is a vile creation wickedly brought to life by Kim, but beyond the mostly stock characters that appear, such as a pair of superfluous teenagers, the standout character is Ma Dong-seok's sensitive muscleman. Layered, hilarious and punchy when it comes to the action, he's a pleasure to watch on screen, so much so that you might wish he was the lead character.

Though few will have had a chance to see it, the events of Train to Busan follow on directly from Yeon's previous film, the indie animation Seoul Station, which details the grim start of the infection during the night leading up to the train ride. Two of the film's main characters appear in the follow-up, incarnated by their voice actors.

Some of the political complexities may be lost on foreign viewers but Train to Busan is a well-executed disaster film that presents enough new ideas to keep things from getting stale over its two-hour running time. Yeon has successfully handled the jump from animation to live action, joining a rarefied field of global filmmakers such as Brad Bird, Ari Folman and Tim Burton.

Review originally published during the Cannes Film Festival in May 2016. The film opens in select theaters in the U.S. on Friday, July 22, via Well Go USA.