Review: CARNAGE PARK is a Shrill Scream into the Desert Void 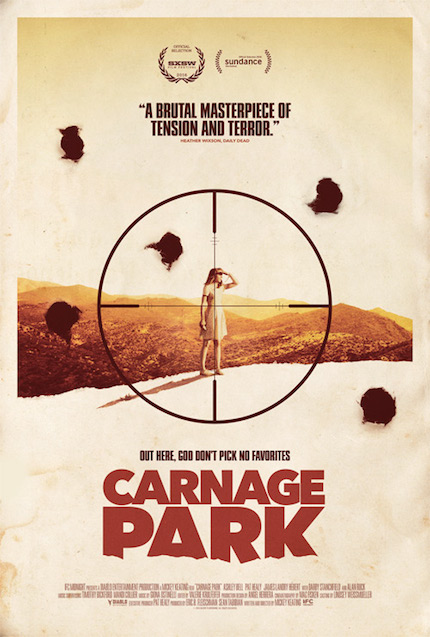 Carnage Park is the latest film from Mickey Keating, a young director who's been knocking them out in rapid succession lately; Pod, Darling, and Carnage Park are his latest feature films, with another (Psychopaths) on the way. Grindhouse desaturation rules the day here, with the desert browns bowing toward a pink look; which is to say that Keating and his director of photography have manipulated the color grading to mimic the look of faded celluloid common of old films.

Here's the plot: It's 1978. Disgruntled veteran Wyatt Moss (Pat Healy) starts off the film by ranting about the bible in an introduction about his obviously psychotic redneck character. Next, two thieves (one calls himself "Joe Scorpion") rob a bank and decide to take Vivian (Ashley Bell as a firebrand in the wrong place and time) hostage, but both are offed in short succession. Now Vivian is alone and must deal with Wyatt --- or more accurately, survive him, his cackling demands over the PA, and the vast parcel of desert land which he uses as a killing playground. The rest of the film is simply a cat and mouse game. The climax is shot and shown in near-total darkness, which was might have been very frustrating to hear and not see --- had I been invested in any of the characters.

Carnage Park feels like it wants to be Natural Born Killers mixed with the The Hills Have Eyes, by way of Rob Zombie's The Devil's Rejects with a heavy dose of Reservoir Dogs in a grindhouse package with snippets of showy swagger. Nostalgia is something a lot of filmmakers have been honing in on for the last few decades, whether it's either adoration for the 70s exploitation flicks or the synth-packed horror films of the 80s. As someone who also grew up watching films of both eras, that's a temptation and a comfort. However, while these influences might sound pretty good, too many strong flavors make for a bitter soup. Likewise, the shrieking score and sound design --- which work well in smaller doses in Darling --- was overkill for Carnage Park.

Pat Healy and Larry Fessenden --- both great character actors --- shine in their respective roles as the trapper and the trapped. While Bell is good, Keating never lets her lower her pitch or her outrage. It often feels that the hair-trigger women in Keating's films are mostly one-dimensional, tortured souls who are just a breath away from a nervous breakdown or psychotic break --- or both, as evidenced in Darling, which appears to have been heavily influenced by Repulsion.

Carnage Park is available to watch via IFC Midnight in New York and on VOD July 1 and in Los Angeles on July 8. Check out the trailer below.