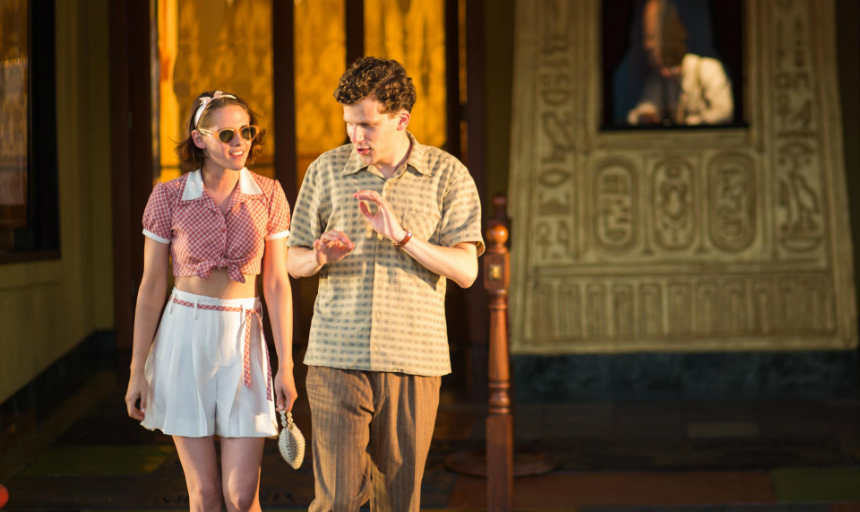 You ever see the Woody Allen film about the older man who’s in love with a younger woman, only to have her torn between her affection for another nebbishy guy? Sure, it’s fair to say that Allen’s treading on familiar territory, but there remains very much a thrill at seeing even a glimmer of the genius that the filmmaker brings to his annual output.

Café Society is a bit of a departure on two fronts. Metatextually, it’s the beginning of his relationship with Amazon Studios, a clear sign that the VOD companies are taking the lead in non-blockbuster indie flicks. Secondly, it’s Allen’s first foray into digital filmmaking, entrusting the gloriously talented Vittorio Storaro to lens his latest and shooting on Sony’s F65.

Visually, this presents a glossy, almost technicolour look, free from the usual graininess that gives many of his films an old-timey look. Chromatically, it’s splendid, but there will certainly be those who decry the more smooth-looking imagery, wishing for the addition of artificial noise. In terms of production design, this is a sumptuous visit to the glamour of Hollywood and the intoxication of 1930s New York, complete with a loving homage to a bridge made cinematically famous in Manhattan.

Jesse Eisenberg plays the Allen avatar with a take bordering on the parodic, yet in the end it’s quite a sweet take on the kind of up and coming kid trying to make a go. Kristen Stewart and Blake Lively make up the pair of love interests, Steve Carell plays the always-on-the-move agent, and Parker Posey heads the rest of the terrific ensemble of character actors.

With narration by Allen, the film feels novelistic, painting a kind of Gatsby-esque zing as the tale bounces between coasts. It’s a bitter sweet love story told with sun dappled imagery, and throughout the characters are dressed to the nines, playing within gorgeously realized sets and some tremendous vintage automobiles.

Café Society may not immediately jump out as a neo-classic by Allen but it’s a worthy addition to his canon. With echoes as explicit as the title -- it speaks to the 1939 film of the same name that starred Fred MacMurray and Madeleine Carroll -- to more subtle alusions to the life portrayed by gossip columnists like Hedda Hopper, Allen’s rat-a-tat dialogue and philosophical musings certainly entertain.

Review previously published during the Cannes Film Festival in May 2016. It will open theatrically in New York and Los Angeles on Friday, July 15 and will expand to select cities in the U.S. on July 22.

Do you feel this content is inappropriate or infringes upon your rights? Click here to report it, or see our DMCA policy.
Blake LivelyJesse EisenbergKristen StewartParker PoseySteve CarellWoody Allen