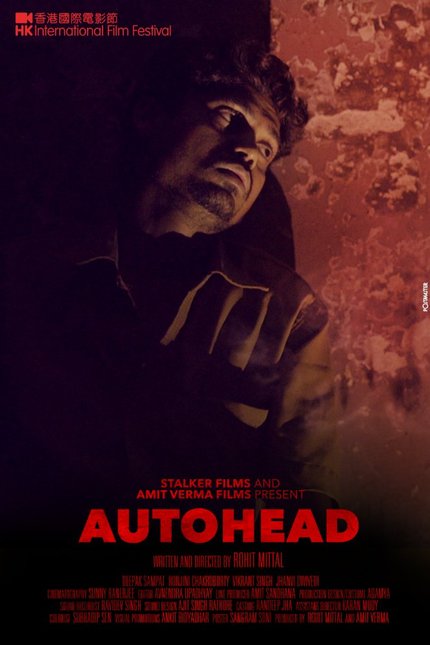 Narayan (Deepak Sampat) is one of nearly a quarter of a million auto rickshaw drivers weaving through the busy streets of Mumbai. As a documentary film crew follows him around, it soon becomes clear that there is something a bit off about him. He loses his temper at the drop of a hat, his tastes in entertainment and women run a little on the rough side, and he doesn't seem to have any filter. One day Narayan encounters a particularly antagonistic passenger and his general unseemliness turns violent, leaving blood on his hands. The film never stops rolling, though, and Autohead captures his descent into madness.

Autohead borrows liberally from a couple of world cinema classics in order to craft a document of a single character coming unhinged. The easiest way to pitch the film is as a cross between 1993's Man Bites Dog and Taxi Driver. There are plenty of obvious similarities; a mentally unstable cabbie, a documentary film crew that becomes complicit in the crimes, but it's the way director Rohit Mittal rearranges these elements to fit his story and setting that makes Autohead special.

At first, Autohead seems like it's trying to tell a story about the loneliness and anonymity of the khaki suited autowallah. Narayan moves through the world with such fluidity that it's easy to look right past him, without the camera crew to document his eccentricities, he'd be just another face in an endless sea of humanity. However, when he is isolated by the camera, it becomes clear very quickly that there's something amiss. It isn't just that he plays pimp to a local call girl, or that he happily describes his favorite methods for pleasing a woman over dinner, it's his glee in performing these deeds that shows just how detached from everyday decorum he really is.

I've got to hand it to Deepak Sampat, his performance as Narayan captures the character's quirks very effectively, and since the character is on screen for the vast majority of the film that is crucial. For the first two thirds of Autohead, Mittal (playing a version of himself as the director of the film crew) places Narayan squarely in focus and allows him to tear apart his own thin veneer of sanity.

Mittal uses tropes familiar to fans of world cinema to skewer Indian culture and mores in a way that is still largely verboeten in mainstream cinema. He uses Narayan as a surrogate for the simmering cultural, religious, and gender tensions that India faces every day. Narayan is a misogynist who loathes women, yet he talks about how much pleasure he can bring them sexually as though that makes him liberated. He feeds on a steady diet of trashy movies that can't help informing his toxic views on masculinity. He sees himself as the antidote to the filth that litters the streets of Mumbai.

The film crew following him turns out to be no better. At first they seek the moral high ground by remaining as objective as they can while watching Narayan commit these horrible acts, but soon enough their outlook changes and they begin to play into his madness for their own profit. Indian news channels, they reason, are full of fake news, why shouldn't they gather footage of a real madman and sell it to the news channels? Their moral objectivity is crushed under the promise of a big payday, showing they are little better than the madman they are following.

Along with Anurag Kashyap's Raman Raghav 2.0, Autohead is one of the grittiest genre films to come out of India this year. The film is certainly not made for mainstream audiences, and I have a hard time believing that it would pass through the censors in the version I saw, however, festival crowds have been eating it up. I really like the film, and if anything I think the inspirations provide an interesting frame around which Mittal was able to build his own story that touches on his own cultural concerns in much the same way Taxi Driver did.

I do have a few issues with Autohead. It's never really explained why the film crew has chosen Narayan as their subject, and it takes a bit too long for them to have a discussion around the ethics of continuing to film him once it becomes clear that they are complicit in his crimes. However, if you can accept those two minor issues as part of the film's internal logic, Autohead is a very good film that touches on a lot of concerns hounding contemporary India with a pitch black sense of humor that really appeals to me.

Do you feel this content is inappropriate or infringes upon your rights? Click here to report it, or see our DMCA policy.
Rohit MittalAdamyaSunny BanerjeeRonjini ChakrobortyJhanvi DwivediCrimeDrama