Neuchâtel 2016 Review: SEOUL STATION, A Zombie Flick That's a Walker Not A Runner 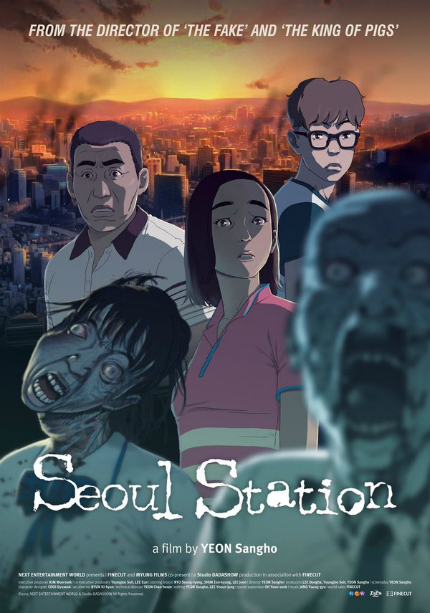 Yeon Sang-ho’s take on the zombie apocalypse doesn't bring anything fresh to the undead table yet contains enough touches of the social commentary that marks the best works of the genre to stir some interest.

An old man, sick and bloodied, stumbles through the streets. When two young students, ironically arguing about the benefits of a social health care system, see the man the impulse to help is quelled on close inspection, “I would have helped him, but he’s just a homeless man.” Finally slumping down with his fellow dispossessed, the old man’s best ‘bro’ desperately attempts to find help for his friend but it’s not forthcoming from an uncaring public.

The old man is, of course, the vector for a zombie takeover that will rapidly consume the area of Seoul's central station. Once the action begins a young girl with a troubled background and a an utterly useless boyfriend soon gets trapped with the destitute in the station office. The girl’s father and boyfriend are similarly stuck together, forced to set out and rescue the daughter from the undead menace as she teams up with a fellow outcast and attempts to make her own exit. As the trio makes their separate escapes they’ll be variously helped and hindered, usually with people in authority doing the latter, while zombie hordes gather and begin a further onslaught.

Truth be told, cartoon zombies aren’t at all scary. They’re also not as much fun as their live-action counterparts. From the paint-red gore and spilt intestines of Romero’s classics to the rogue’s gallery of creative corpses shuffling through The Walking Dead each week, the zombie genre has always been a breeding ground for fantastic visual effects, bloody horror and queasy laughs.

Seoul Station suffers in this respect. Failing to build tension when it comes to the undead hordes, it’s the middle section of generic zombie carnage that suffers from being the least interesting. The highlighting of contemporary issues in modern Seoul and the prospect of tackling them through the lens of the zombie genre provide an interesting set-up but are unfortunately brushed aside for the majority of the film’s running to tell a mostly pedestrian story of zombie Armageddon.

A brutal government crackdown and a surprising twist in the final act adds some spark to this undead ordeal, but ultimately Seoul Station feels like it shuffles when it should run.