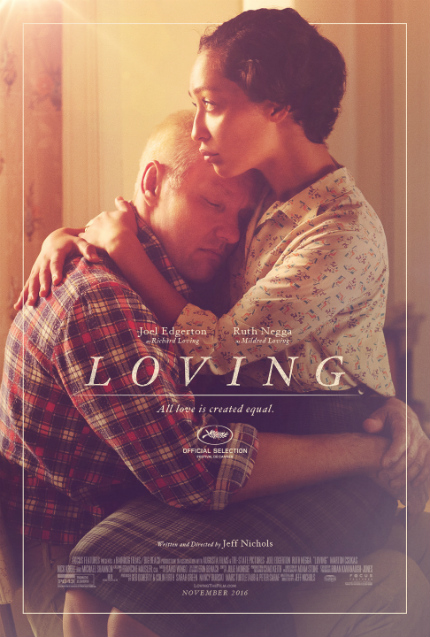 Filmmaker Jeff Nichols has distinguished himself with finely-wrought, outstanding dramas (Shotgun Stories, Take Shelter, Mud, Midnight Special) that develop in unexpected ways. His newest film, Loving, debuted at the Cannes Film Festival in May and is heading for theatrical release on November 4.

Our own Jason Gorber saw the film at Cannes and noted in his review:

With Loving, Nichols has dialed the intensity down to a slow, quiet burn, making his gifts as a filmmaker even more acute. The story of a couple in Virginia who committed the crime of falling in love despite their different racial backgrounds is told as quietly as a murmur, as powerful and lyrically as an epic poem. It's a film whose tonality matches the affections of its leads, never even hinting at histrionics or cinematic bravado.

Joel Edgerton and Ruth Negga star as the couple in question. The first trailer has just dropped and, to be frank, it looks rather like many other films about important subjects: a bit stodgy and expected. But I'm counting on Nichols' gifts as a filmmaker -- and the talents of Edgerton and, especially, Negga -- to help it stand out as much more than that.

You can watch the trailer below. What do you think? Does the trailer make you want to see the movie?

Do you feel this content is inappropriate or infringes upon your rights? Click here to report it, or see our DMCA policy.
Jeff NicholsJoel EdgertonLovingRuth Negga