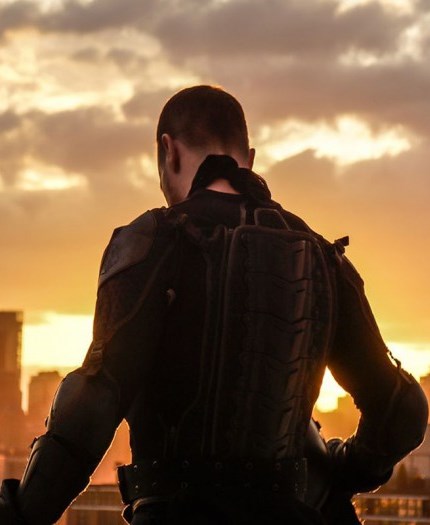 If you thought last year's revenge thriller The Demolisher packed an emotional gut punch, Gabriel Carrer has a message for you: You ain't seen nothing yet.

Speaking to me about his next film, the intriguingly titled Ventablvck, the director was very clear he was planning to go to even further to explore how dark the human soul can get.

"This film will be a violent attack on the people who didn’t like The Demolisher," said Carrer when I asked what to expect from the film. "This film is about a man and a woman who choose not to be a part of society. It’s about a man and a woman who thrive in the darkness, who hold themselves back from fighting others, or stand by their actions. It is a fight movie without being a fight movie."

The title comes from the scientific term "vantablack" which is the name given to the blackest substance found. Absorbing all light, a vantablack is so dark it appears as a hole when placed on any surface.

"This was terrifying and I wanted to explore this idea with us as humans," said Carrer about how this inspired the film. "How dark can we get when we are alone? What are some themes that can come out of that? I changed the wording of it because when we enter darkness, things are distorted. When we come out of darkness, things are never how they were. Everyone can relate to loneliness, rejection and not feeling welcomed in certain circles or aspects of society."

Ventablvk will debut at Fantasia Film Fest’s Frontières International Co-Production Market where Carrer and Latefox Pictures will present a concept short as part of the Raven Banner Entertainment showcase.

“Fantasia International Film Festival is one of my favourite film festivals because it allows films that go off the beaten path to have an audience. The audiences are amazing because they are also made up of fellow filmmakers. This is more than a festival, it has become a ritual for cinephiles."

As we eagerly await the darkness that awaits us, The Demolisher is out now on Blu-ray.