Fantasia 2016 Review: MAN UNDERGROUND, A Love Letter to the Thrills of Conspiracy 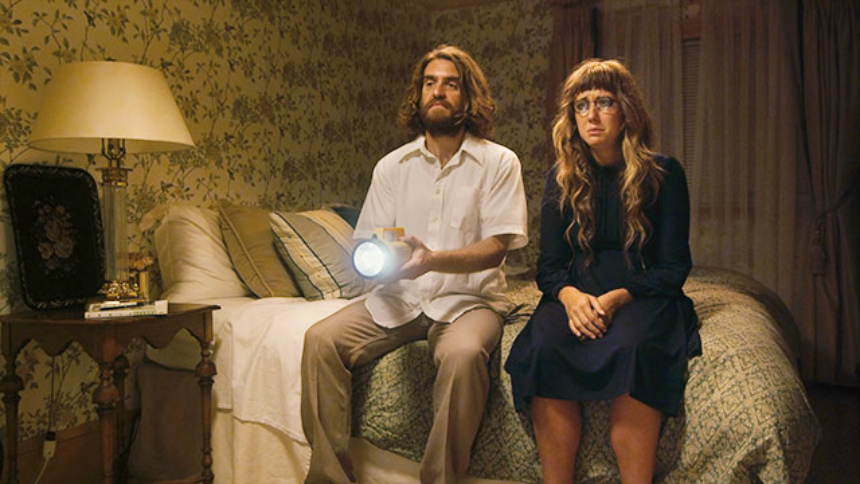 William Koda (George Basil) is a man with a story to tell. Once a geologist for the U.S. government, he now spends his time in upstate New York telling tales of digging tunnels deep underground where they uncovered…something. Speaking to a small, mostly disinterested crowd, he speaks of cover-ups, plots to rid the world of the truth, and a grand conspiracy to keep the truth deeply hidden below ground.

Man Underground takes at its core the most driving aspect for any conspiracy junkie, the notion that you’re only being paranoid if they’re not actually out to get you. For Koda, he experience has left scars both physical and psychological, and it has resulted in a palpable kind of quiet rage, a somber quietness that comes from the understanding that you hold the key to information that you know will never be accepted without ridicule and shame.

Working with videographer Todd (Andy Rocco), the nephew of a colleage, along with Flossie (Pamela Fila), a warm and considerate waitress with dreams of being an actress, the trio set out to tell the story of what took place, using the tools of fiction to tell the truth of the situation. When Flossie’s douche boyfriend (Stephen Girasuolo) comes to the mix, things go predictably awry.

What makes Man Underground work well is the fine balance between the zany, socially awkward moments that provide levity, as well as the dark, deeply melancholic character beats that provide much of the drama. First time feature directors/writers/producers Michael Boroweic and Sam Marine manage to craft both unsettling and sardonic moments with equal measure.

Basil in particular has the hardest job, coming across as aloof and occasionally rageful without ever losing the audience's sympathy. Similarly, the awkward yet sweet Flossie could easily simply play as archetype, yet Fila manages to inject a real strength underneath the sweet exterior, standing up for herself even if her decision making may leave a bit to be desired.

It may be simply an echo of Basil’s fine beard, yet for me the film mixes a slow, quiet dread of the initial moments with Macon Blair in Blue Ruin with an almost broad silliness of Will Forte’s role in Last Man On Earth. When even the most raw of emotions are being spilled, the seriousness is undercut by some fantastically awful animal shirts (oh, those Belugas kissing!), while scenes that could come across as silly have a dark, foreboding impact as you question whether or not the lunacy could well be true.

I was particularly enamoured by how they did the recreation film – it’s not easy to make bad camerawork look appropriately bad, and the intercut between VHS and the Red-captured footage provides terrific visual navigation between the diagetic shifts. Similarly there’s an attenuation to the “bad acting”, particularly from Flossie as she gains her confidence and finds pathos in telling Koda’s story of loss.

Part social drama, part goofy, this slow-boil film is anchored by fine performances and a confident script that doles out information when it needs to. It creates its own little world that’s coherent and captivating, finding both the power and the pathos of this tragic character who at least for himself believes in his narrative. The film wisely leaves opaque any notion of what “really” happened, allowing the audience to invest in the characters rather than teasing out the intricacies of either his lunacy or his Cassandra-like tales that should well be believed.

Man  Underground delves deeply into Koda’s world, creating a confident, well crafted indie tale that showcases Borowiec and Marine’s ability to elicit terrific performances and give a sense of scale even to small parlour scenes. At times there are flashes of pretentiousness, with some of the camera angles a bit too slick and on the nose, but as a love letter to the thrills of conspiracy along with revelling in the lunacy that is indie filmmaking, Man Underground is a fine work indeed.