Blowing Things Up In Praise Of Pacifism, Here Comes The HACKSAW RIDGE Trailer 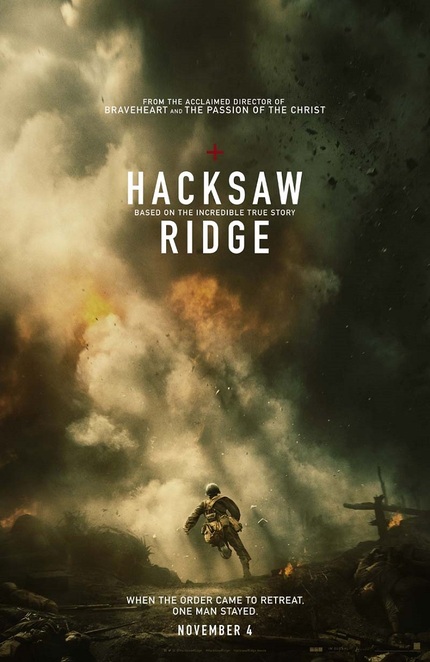 Has Mel Gibson been forgiven? And is his Hacksaw Ridge the most violent movie ever made in praise of pacifism? Well, judging from the fact that Gibson's name never appears in the new trailer for his upcoming Hacksaw Ridge - not even as a piece of text in a billing block - the answer to part A would appear to be either 'no' or, at the very least, an awful lot of fear from Lionsgate that the answer is probably no. And the answer to part B? That would appear to be a , 'Hell, yes' with the only title that could conceivably give it a run for its money being Gibson's own Passion of the Christ.

HACKSAW RIDGE is the extraordinary true story of Desmond Doss [Andrew Garfield] who, in Okinawa during the bloodiest battle of WWII, saved 75 men without firing or carrying a gun. He was the only American soldier in WWII to fight on the front lines without a weapon, as he believed that while the war was justified, killing was nevertheless wrong. As an army medic, he single-handedly evacuated the wounded from behind enemy lines, braved fire while tending to soldiers and was wounded by a grenade and hit by snipers. Doss was the first conscientious objector awarded the Congressional Medal of Honor.

Now lined up to premiere in Toronto there are clearly big plans and hopes for this one and with its blend of religion, explosions, and explicit violence all wrapped up in a message of 'Well done, this guy, for not shooting people but, god damn, doesn't it look awesome when we blow people up?' it may very well be the sort of film Middle America embraces en masse, even if Gibson does revert to telling us what he thinks about the Jews between now and then. It's sort of the movie that Trump America seems to want and deserve right now.

New trailer? That's down below.

Do you feel this content is inappropriate or infringes upon your rights? Click here to report it, or see our DMCA policy.
actionandrew garfieldhacksaw ridgemel gibsontrailerwar