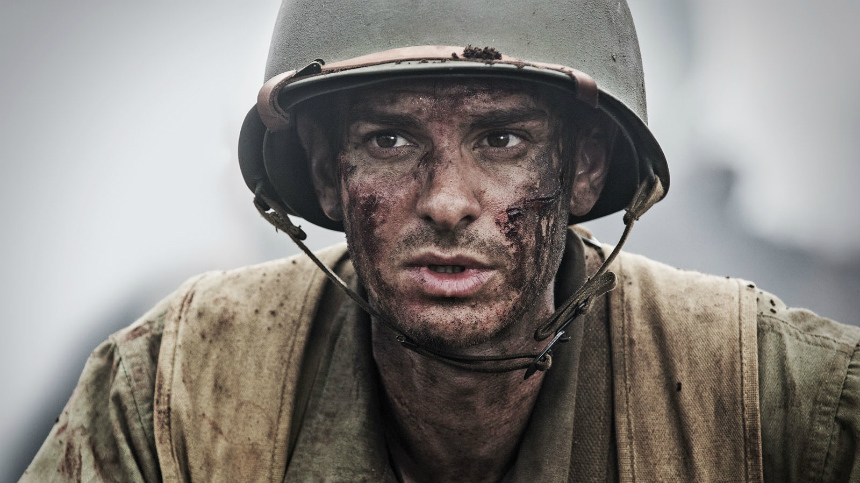 The true-life story of Desmond T. Doss comes vividly to life in Hacksaw Ridge, a biographical picture directed by Mel Gibson that features a soulful performance by Andrew Garfield.

Solid and stirring -- and very respectful -- the movie begins with a battle scene marked by flaming bodies in slow motion before rewinding to Doss as a child in the 1920s. Raised in the gorgeous Blue Ridge Mountains region in the U.S., young Doss gets in a fight with his brother and immediately regrets the damage he has done. Fast forward to 1942, and Desmond is a young man (now played by Garfield) who loves his mother (Rachel Griffiths) and has a strained relationship with his father (Hugo Weaving).

Small town life in the U.S. is calm and placid, allowing Desmond to fall in love quickly with a beguiling nurse named Dorothy Schutte (Teresa Palmer). But his brother Harold's enlistment in the military firms up Desmond's resolve to do the same, in spite of his religious beliefs as a Seventh Day Adventist. He figures he can serve as a medic and save people, allowing him to avoid killing anyone and thus breaking one of the 10 biblical commandments.

That's the crux of the matter: Desmond describes himself as a conscientious objector who wants to serve his country in the military. The bulk of the film then deals with the consequences of his decision, first in training camp, where he falls under the leadership of Sergeant Howell (Vince Vaughn) and Captain Glover (Sam Worthington), and later on the battlefield in Okinawa. 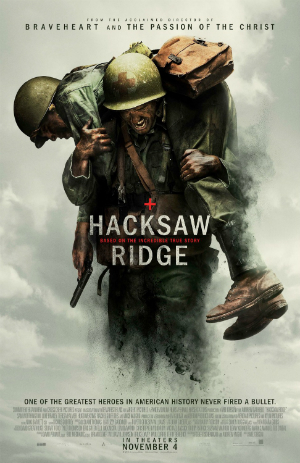 The training camp sequences initially play out like a classic WWII military comedy until Desmond asserts his rights as a conscientious objector. Then things turn quite dramatic. The battlefield sequences are uniformly bloody and painful to behold, and also give a sense of the sheer madness and confusion of warfare in close quarters, as bodies are shot and explode and fly into pieces. It's a wonder that anyone survives.

Throughout the movie, Gibson as director modulates the tone expertly, from the sweet, chaste romance that unfolds between Desmond and Dorothy to the earthy, stereotypical military humor to the horror of battle, as friends are killed left and right, and there's nothing to be done about it except try to live. Gibson may not have directed a feature in 10 years, since Apocalypto, but he still has the eye for combat that informed Braveheart.

Much of the movie's strength is reliant on Andrew Garfield, who creates an incredibly heroic persona out of a modest man's faith in God. In certain moments, Desmond displays a stressed-out persona that's somewhat similar to the character Garfield played in 99 Homes, yet Desmond has a far different motivation; his expressions are more beatific, as he seeks to serve God and his fellow man.

That being said, Hacksaw Ridge walks a narrow, expected path. From a narrative standpoint, the story checks all the expected boxes. The only real surprise is that the foundation of Desmond's faith is not fully explored. Was it only a single childhood incident that spurred his faith? Were his parents similarly of deep faith? We get mixed messages on this front, with Desmond's brother happy to join up to be a soldier, and his father permanently damaged, it appears, from his military service.

Even though Hacksaw Ridge plays out as anticipated, it's well-paced and well-performed, and honors the service of the military men depicted on screen. Like Desmond's fellow soldiers, you don't have to believe as Desmond did to respect what he accomplished.

The film opens wide in theaters through the U.S. and Canada on Friday, November 4. It also opens this weekend in Australia, New Zealand, and parts of Europe. It will expand to other regions of the world in the coming weeks.

Do you feel this content is inappropriate or infringes upon your rights? Click here to report it, or see our DMCA policy.
Andrew GarfieldMel GibsonSam WorthingtonTeresa PalmerVince Vaughn