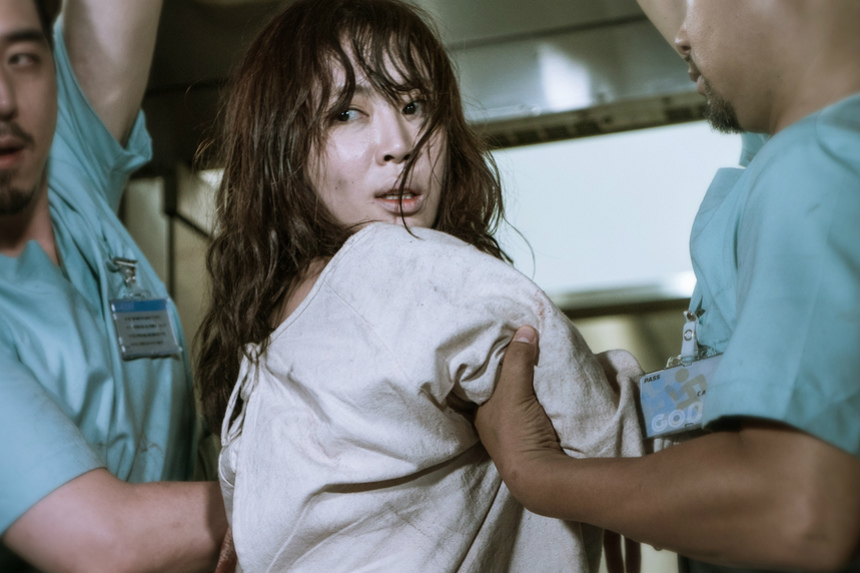 Released earlier this year, the surprise hit Insane is the sixth film from versatile director Lee Cheol-ha. Employing a less than original premise, this new thriller turns out to be a middle-of-the-road attempt that pales in comparison to a slew of stronger titles in what has so far been a strong year for Korean thrillers.

A disgraced TV producer/host accepts a job on a lowly investigation show that leads him to cross paths with a murder suspect in prison. She claims to have been abducted and abused at a secret psychiatric institution, and the producer dives into the case to uncover whether her tales are fabrications or not.

Insane begins with a terrific opening shot which slices diagonally down through the skyscrapers of Seoul and introduces us to the lead character just as she is kidnapped in broad daylight. Drug into a basement facility, the film, literary and figuratively, keeps going down from there.

The main issue here is the one-note depiction of the characters. Played with little charisma by Lee Sang-yoon, known primarily through his work on television, the young, impatient producer with a chip on his shoulder is a character that feels all too familiar and at no point does the script allow him to break out of this casual mode. As such, all his actions are predictable and there's no reason to root for him. Kang Ye-won, a talented actress who has long see-sawed between good and bad roles, fares somewhat better. Yet she too is not called on to do more than portray a stock character, in this case the 'crazy' Korean girl, who eventually falls into a standard Korean female thriller mode.

Director Lee has made a career of hopping from one genre to the next, whether romantic mystery (Love Me Not), documentary (Hell?! Orchestra), found footage horror (The Haunted House Project) and even interactive film (Story of Wine). But, rather than master each new storytelling style along the way, he's merely hit the requisite beats before moving along. And such is once more the case with his latest. A rote thriller with familiar characters and settings, Insane ponders along to a predictable twist finale. Yet it doesn't stop there, opting from additional revelations that are more tedious than surprising.

Still, the production is competent, if unremarkable, the film is easy to follow and the running time is a trim 90 minutes. Yet with so little on show, it begs the question: what was the point?

Do you feel this content is inappropriate or infringes upon your rights? Click here to report it, or see our DMCA policy.
BiFan날 보려와요강예원insane이상윤이철하kang ye-wonlee cheol-halee sang-yoon