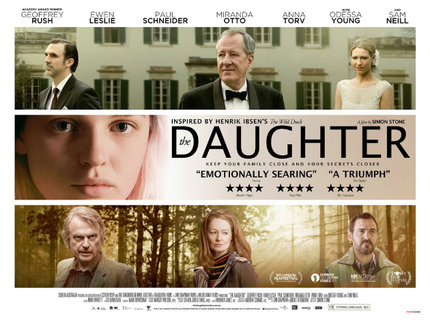 Simon Stone's The Daughter is an interesting debut drama about a small community united by a somewhat brooding lumber mill owner played by Geoffrey Rush. The real focus of the film falls on two families both united by this slowly liquidating timber business. Behind their small-town fronts exists a series of devestating secrets that will threaten to destroy the world of the film's eponymous daughter, played rather compellingly by the lively Odessa Young.

Adapted by the director from an Ibsen play of the same title, first as a play and then as a film, this first feature project has managed to attract a surprisingly high-profile cast, and it has been executed in quite a smart, deft way. Interestingly for a film adapted from a Norwegian source by an Australian, there is also something of a Nordic noir quality to this film. In fact, it almost reminds me of the deep, emotional focuses of Joachim Trier's films.

Unfortunately, that resemblance (to my mind) leans more towards the English-language Louder Than Bombs then it does towards Oslo, August 31s. But nevertheless, this is one of those enjoyable, honest Trierean films about sadness, and it has a limited release with Metrodome Distribution in UK cinemas now.

ScreenAnarchy: Your film is quite interesting in that it might seem quite un-Australian to foreign audiences – it’s certainly not the kind of depiction of Aussie life we’re used to seeing.

Simon Stone: It’s funny you should say that, because the film’s not set anywhere, really. It was shot somewhere, and that was New South Wales. We were actually at the foot of the Snowy Mountains, so called because they’re the only mountains in Australia where it’s cold enough to have snow on them. But look, when I shot the film, I was looking for locations that felt as universal as they possibly could.

Ones that could potentially be the Scandinavia of the play’s original setting. Or it could be Scotland, or America, or China – I was always looking for that universality. The location itself was not so important. I mean, it did have a strong metaphoric resonance to the kind of macro sense of the story I wanted to tell, but I never wanted people to be able to say, “oh, that looks like Australia, so it must be a film about Australian families and Australian problems.”

Instead, I wanted audiences everywhere to be able to potentially see themselves in it. I mean, Australia does have such a distinctive landscape, so I guess a lot of our films do end up being quite distinctly Australian. But I guess my hope is that, say if somebody was watching my film in Poland, I would hope they wouldn’t be able to tell if my film was Australian or American or French or whatever, and just see themselves in it instead.

So that was always the overarching hope. I guess The Daughter is still really quite an Australian film in some senses though, because it’s almost exclusively made with Australian talent – with the exception of Paul Schneider. All the people who helped make the movie, who were contributing this kind of collective imagination, all had Australian backgrounds, I guess. So yeah, it’s basically an attempt at “Australia does universal.”

It’s interesting you mention that collective experience, because do you think in some ways your film has equally transformed Ibsen’s play into a film about the middle Australian experience?

No, you see I really think it’s more universal than that. I think it’s more just a film about the small town experience or environment. Or rather that it acts like a microcosm for any kind of society where this danger of revealing the truth exists. It was the shocking consequence of these kinds of revelations, or even the inevitability of those kinds of truths emerging, that I wanted to explore.

I mean, that kind of revelation is a very typical story in theatre, but it can also apply to just about any culture anywhere. So the film is really more about that kind of small-town experience, and particularly in a small town that’s sort of in the middle of shutting down. That’s certainly what I was aiming at, more than recreating a sort of typical Australian experience.

I think that’s what people have enjoyed about my film in Australia, as well. I mean, Australian audiences are often treated to a very specific kind of version of suburbia or rural Australia, and I think there’s this feeling that the culture they’re shown is very rarely one that relates to their own experience. So I think that’s why my films been quite successful there. 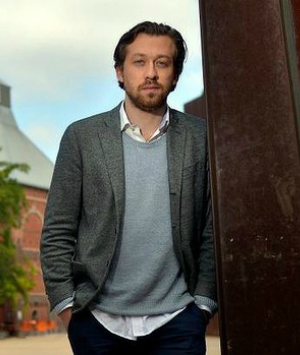 What made you settle upon adapting Ibsen’s play?

Well, I had previously written a play based on Ibsen’s play myself. So I did a stage production where I re-wrote the original as a new play. That proved to be quite successful in Australia actually, and it toured around the world too. So in many ways, I knew that story very well, and it seemed like a good idea to continue adapting my play into a film.

But in fact, the play was kind of always was written in the format of a screenplay, so I guess I’d always had that kind of intention. Still the process then actually turned out to be really hard, because I thought I’d written something with a lot of short, cinematic scenes in lots of different locations, but it wasn’t necessarily a film.

What I thought was a screenplay wasn’t actually one at all, because all it had in it was talking. Whereas most screenplays are at least fifty percent action, or descriptions of locations and people just interacting with their environment.

That sounds like a tricky thing to resolve, how did you overcome this?

Well, the first thing I did was effectively write a silent film. I rewrote the entire piece without dialogue. That actually proved to be a really good way to find out how I could tell this story as a movie, and not just a series of scenes of people talking opposite each other as they would do on a stage.

Of course, it horrified the producers, because they wanted to know where the story they’d paid me for had gone. [Laughs.] But then I started filtering the dialogue back in – except now all the necessary locations and interactions with the environment were in place.

Dislocation and alienation seemed to be two things that you really tried to communicate visually in this film.

Yeah, well part of the reason the characters end up doing the things that they do is because they have been isolated and alienated from the world around them.

They have been so isolated from hearing other people’s stories about how messy and complicated their lives are, and they’ve never heard these kinds of unideal experiences being shared. So the extent of the shame they feel reaches that kind of level because to some extent they don’t live in a big city where you hear those kinds of stories happening and being talked about every day.

Could you tell us a bit about how you approached communicating these sensations in the way you filmed?

I suppose the way we shot the movie involved creating this kind of tension between a series of close-ups of the characters and then distant establishing shots.

In the film, there are these moments where you’re very close to the characters, and you’re not able to see how they connect with the world around them. Then we would also have a number of shots of them in landscapes, where they would be quite small and insignificant in relation to their landscape. So it was always about moving between this sense that their world is everything to this objective perspective where the world almost doesn’t even know that they exist.

You also sometimes have dialogue (or voice-over) playing in a way which is delayed or detached from the character’s act of speaking. In those instances it also becomes quite difficult to feel connected with the characters yourself.

Oh, it’s interesting you say that! Most people seem to feel the opposite. That kind of technique we use sometimes encourages people to feel almost as if they’re already part of that character’s consciousness. That they already have access to their most private thoughts.

I mean, in many ways, doing that is actually a much easier way to get your audience to feel closer to certain characters in an ensemble piece. In most films you only really get close to one or two characters in movies, and that’s typically because you have a protagonist and you stick with them in order to gain a certain level of sympathy or identification with them as the film progresses. But in an ensemble drama, where the time is much more divided between lots of people, it’s quite hard to get people to feel those kinds of feelings quickly enough.

So during the editing process, it was very much about trying to say, “you are already inside this person’s head.” You are already with them, and you’re even still with them when you’ve moved on to start looking at the next character, because you’re still hearing their thoughts. So it was a great way to create affinity amongst an ensemble cast.

And have you been finding that the techniques you used have been having the intended effect on audiences?

You know, I really think it’s wonderful that audiences are able to retrospectively analyse your films and the kind of metaphors you put in it. They are almost able project stuff onto the film for themselves. I think that’s beautiful.

For that reason I always try to never agree or disagree with other people’s readings of my film, because it’s never necessarily either this or that. I guess the important thing as a director is to just find things that will have… resonance… to put in your film. Then whatever direction that resonance goes in is just up to the audience member. I think that’s a wonderful thing.

Do you feel this content is inappropriate or infringes upon your rights? Click here to report it, or see our DMCA policy.
Anna TorvAustraliaGeoffrey RushMiranda OttoSam NeillSimon Stone