LA Film Fest 2016 Review: BEYOND THE GATES, The Horror Of A VCR Board Game 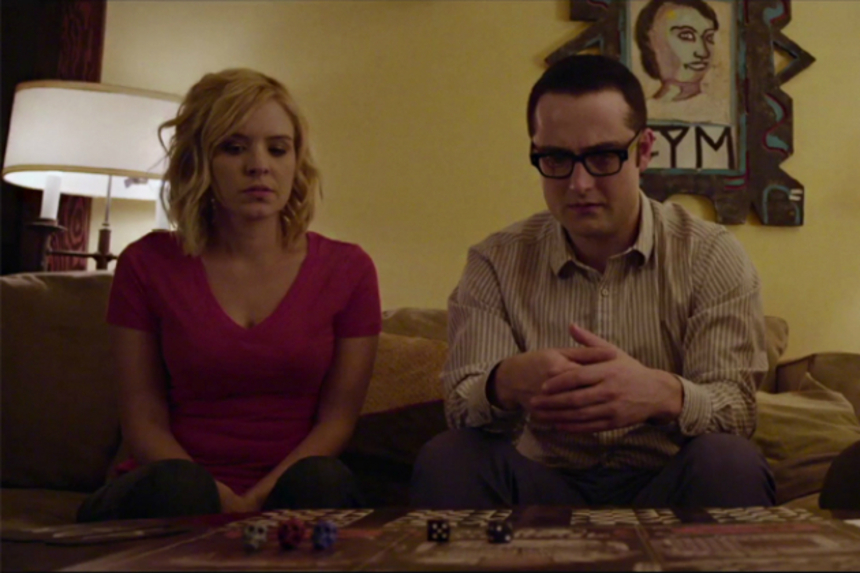 The final 20 minutes or so of Beyond the Gates are rather glorious: the music soars and swells as the horror-fuelled action grows more chaotic and splattery.

It's the conclusion of a story that begins at a video store. The movie's prelude shows a man and woman in the store parking lot: the man's eyes grow big at seeing something. Seven months later, his sons Gordon (Graham Skipper) and John (Chase Williamson) arrive to clear out the video store owned by their absent father.

Whatever strong emotions the brothers may have felt, they are now resigned to the task at hand. Gordon has moved away and has some kind of regular employment. He is soon joined by his supportive girlfriend Margot (Brea Grant). Meanwhile, John had a tougher time of it; he's recently broken up with his girlfriend and now likes to hang out with Hank (Justin Welborn), a miserable s.o.b. who makes a pass at Margot and cusses out Gordon within minutes of seeing them.

The first 20 minutes or so of Beyond the Gates are rather pedestrian: Gordon and Margot talk; Gordon and John talk; Gordon and John pack videotapes into boxes; Gordon, Margot and John end up staying in the old family house and talk some more. The incident with Hank is unpleasant but provides dramatic conflict. Gordon and John may harbor resentment toward each other and their missing father, but they're far too polite and pleasant to get into anything close to a shouting match about their past differences.

But then Gordon and Margot stumble across a VCR board game in the video store office and that starts to get things rolling. The game, Beyond the Gates, is hosted by Evelyn (Barbara Crampton), and very quickly establishes itself as something far more dangerous than it initially appears. From that point onward, the pace picks up and the movie slowly becomes more compelling and much more an exercise in horror.

Jackson Stewart directed, making his feature debut after a couple of short films, and also cowrote the original screenplay with Stephen Scarlata. The long, long setup feels like it's set in molasses, with a minimum of horror; perhaps the conversational exchanges are meant to be more humorous than I discerned, which might explain why it felt slow to me.

Once things get going, however, Beyond the Gates is an enjoyable romp, complete with over the top practical effects that call back to some of the more outlandishly gruesome horror films of the late 80s and early 90s.

Brian Sowell's moody photography gets suitably more colorful and Josh Ethier's ace editing keeps things flowing nicely. Wojciech Golczewski's original musical score enhances the action as well, serving as a cohesive glue that ties together disparate elements. As far as the performances go, the cast -- including Matt Mercer as a friend/police officer and Sara Malakul Lane as an unfortunate waitress -- is likable and winning, encouraging the audience to root for their survival (even Hank). Barbara Crampton portrays her creepy game host character with a delightful bounty of juice and menace.

In Beyond the Gates, patience is rewarded. The third act, especially, makes one eager to see what the filmmakers come up with next.

The film enjoyed its world premiere at the Los Angeles Film Festival.

Do you feel this content is inappropriate or infringes upon your rights? Click here to report it, or see our DMCA policy.
Barbara CramptonBrea GrantChase WilliamsonGraham SkipperJackson StewartLAFF 2016Sara Malakul Lane