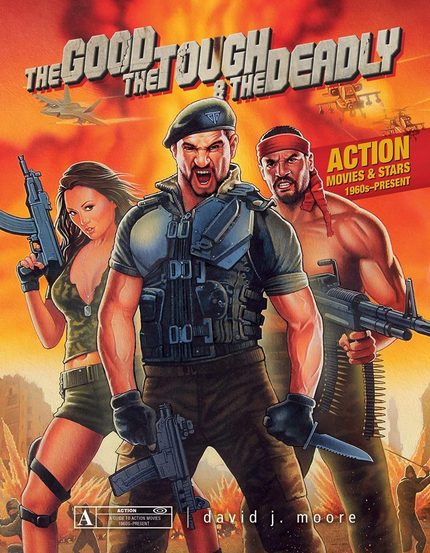 Last week saw the release of a monster book dedicated to the men and women who have crossed over from the world of sports or martial arts and made a career out of crushing skulls and breaking bones on the big screen. THE GOOD, THE TOUGH, AND THE DEADLY: ACTION MOVIES AND STARS 1960 TO PRESENT is an ode to them and all they have given us as fans. It's a collection of essays, reviews, and interviews, a comprehensive guide to all things "action"! To celebrate the release, Dark Delicacies in Burbank, CA is hosting a major event this coming Sunday, June 26 at 2pm. Author david j. moore will be in attendance with many of his contributors as well as some of the men and women the book is about. Here's the latest update for the event from the author himself:

"This is a complete list of the guests attending the book signing at Dark Delicacies on Sunday, June 26th at 2PM:

Sheldon Lettich (writer of Bloodsport, director of Lionheart)
Craig R. Baxley (director of STONE COLD and Action Jackson)
James Bruner (writer of The Delta Force and Invasion USA)
Michael Worth (star of Fists of Iron and Final Impact)
Robert Chapin (star of Ring of Steel and Dragon Fury)
Jino Kang (star of Fist 2 Fist and Weapon of Choice)
Eric Jacobus (star of Death Grip and Rope-a-Dope)
Julian Lee (star of My Samurai and Dragon and the Hawk)
Paul Logan (star of Ballistica and The Horde)

So you see, this isn't your average signing, this is a freaking invasion and one you won't want to miss. I mean seriously, schedules permitting, Marko Zaror and Scott Adkins? Jino Kang and Paul Logan? This event is going to be crazy, you won't want to miss it. Check out the Dark Delicacies sight for more info: http://www.darkdel.com/.

Do you feel this content is inappropriate or infringes upon your rights? Click here to report it, or see our DMCA policy.
Cynthia RothrockDon "The Dragon" WilsonMarko ZarorPaul LoganScott AdkinsSheldon Lettich