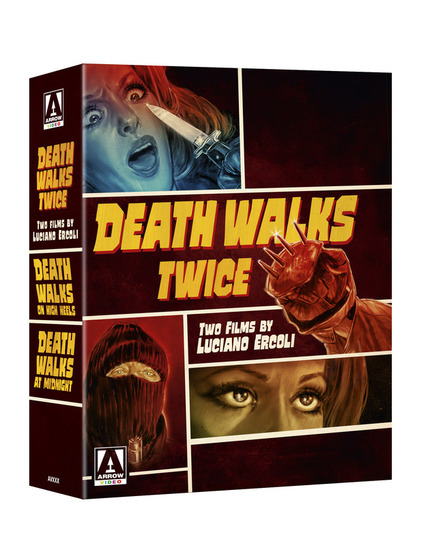 This is tremendous news for Canadian cult film fans.

Arrow Video, one of the premiere home video distributors from the UK, and Canadian distributor Unobstructed View have formed a partnership that will see Arrow releases on our store shelves starting in July. If ever they were available north of the 49th they were sold as an expensive import.

Arrow Video releases hark back the video store glory days when VHS covers were lurid and exciting. The Label employs top illustrative artists to create brand-new cover art featuring reversible original key art as an alternate option.  The label releases definitive editions that include complete uncut versions, multiple audio tracks, copious extras, cutting edge design and informative booklets.  Each release is produced to the highest standard with films often newly remastered from the original negatives exclusively by Arrow’s restoration department. The collection is now available in Canada, the United States and the United Kingdom and spans more than 100 releases by a host of major auteurs from Argento to Yuzna!

Our own Josh Hurtado has been their whipping boy for the past few years down in the States. Maybe now we here in Canada can get in on some of the action and stop his glorious home video monopoly!

Arrow Films is a known UK distributor of classic, horror, and cult films on Blu-ray and DVD via their successful Arrow Video brand. Unobstructed View is a leading independent all-platform distributor in Canada and the US with existing output deals with Magnolia Pictures, Kino Lorber, Film Movement and Synapse Films.

“We are excited to be partnering with Unobstructed View in Canada to launch our premium home entertainment product,” says Arrow Films CEO Alex Agran. “They are the perfect partner for us and have a great blend of passion and experience to work with retailers and customers alike on our unique product offering. Since our launch in the US 15 months ago, we have had a sensational response to our product as well as to our brand Arrow Video – which I am confident we can replicate in Canada. As for product – it’s our best slate ever, stay tuned for the first announcement!”

“Arrow Films’ product fits perfectly into our catalogue and we continue to believe in home entertainment as a viable platform for film,” declared Unobstructed View Fearless Leader Jonathan Gross. “Their high-quality product and reputation are the choice of consumers looking for collectibles.”

Some of the top-selling releases covered in the deal include American Horror Project, The Mutilator and The Beast. Upcoming 2016 films feature The Swinging Cheerleaders, The Bloodstained Butterfly and Microwave Massacre.