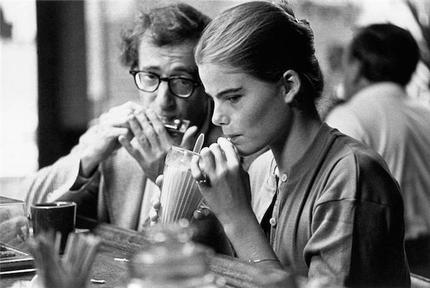 Well, here we are again (inasmuch as the word "again" can be applied to a problem that never went away, and which we've all known about for as many as twenty years). The subject of a blistering indictment penned by Ronan Farrow (plus one jaw-dislocatingly savage jab in an opening monologue at Cannes), Woody Allen, and the media's support of Woody Allen, is once again under fire due to allegations that Allen molested his adopted daughter Dylan when she was seven years old.

The nominal responses are in play: how or if we can condone the decisions of Allen's creative collaborators, particularly (though this is a form of sexism) young women like Kristen Stewart and Blake Lively. Heightened discussions about how culture pressures and silences the accusers in cases like these - a particularly venal pillar of what we have come to call rape culture.

Plus, of course, from cinephiles like ourselves, there has been a spate of soul-searching about what we, as viewers, are meant to do (if anything) with the art created by a person who might be a child rapist.

Matt Zoller Seitz and Alyssa Rosenberg have written excellent pieces outlining the latter question in some detail (here, and here). I'm not here to bore you with the particulars of my own thought process on whether to interact with Allen's work going forward (or Polanski's, or Cosby's... I tried the latter last year, and didn't get where I wanted to go with it).

There is an unvarnished fact about Allen's filmography, however, that has been mentioned again and again this week: he builds a notable - and in this context disturbing - number of stories around the model of romantic and sexual relationships between older men and much younger (sometimes inappropriately so) women.

In Manhattan and Husbands and Wives, he dates (and, in the former at least, openly fetishizes) actual teenagers; in Mighty Aphrodite, Whatever Works and Magic in the Moonlight, Allen or his surrogates are separated from their romantic partners by more than three decades.

Icky as they may be, these fictional relationships are a far cry from the predatory abuse of a child. What I think is worth examining here is how Allen has continuously created films that normalize a certain type of male sexual behaviour - and in so doing, has contributed to a larger culture of power and privilege that Allen, himself, has taken advantage of, and continues to be protected by, if the allegations against him are true*.

(*This is the last time I will say "if the allegations are true." I believe Dylan Farrow. I recognize at the same time that there has been no due legal process that has resulted in a conviction for the crime that Allen has been accused of; I further recognize that the physical evidence that would support such a case has long since passed into obscurity. We are at a judicial impasse here, both for those who wish to proclaim beyond a shadow of a doubt that Allen is guilty, and those who would insist that he is, by default if nothing else, technically innocent. I believe Dylan Farrow, for my own reasons. You may leave whatever enraged comments you see fit, if you believe this to be unsupportable.)

Here's what we know: Allen routinely develops romantic and sexual relationships in his films which pair older, generally intellectual, men with younger, oftentimes "free spirited" women. These tend not to "work out," as we might reasonably expect. In fact, in many cases, Allen is using the inherent unworkability of those relationships against his own characters, who come out looking like buffoons.

Here's another thing those films (and, let's face it, most films) do: they tend to unilaterally present young, unvarnished female beauty (oftentimes alongside "uncomplicated" personalities) as some kind of Socratic ideal of what every man, supposedly, lusts after.

This, of course, creates and enforces cultural norms. I, being a man who is generally uninterested in sex as a purely physical transaction, and is consistently told by both men and women that he is "not typical" as a result - the weakest, least consequential form of othering that can nonetheless still be called othering - I can tell you fairly clearly where those norms stand.

As norms go, the idea that "normal" men lust after beautiful women (their mental facility not, generally, being a prioritized aspect of the conversation), and that the younger these women are, the better, is fairly well established. It's part of decades and decades of movies and TV, and just about everything else. Hey, it's even in the Catholic apocrypha regarding the ages of Mary and Joseph, if you're looking for any millennia-old, my-god/your-god support for all of this. (God: the original child molester.)

I joke, but the notion that sexual maturation ushers women (and men) into full adult status has been with us a lot longer than it hasn't - and the persistence of the modern idea that underage women are sexually desirable, while now legally unavailable, creates disturbing myths of its own. The jailbait trope, from the name downward, demonstrates cannily how passive-aggressively cavalier we remain on the subject of young women as sexual partners.

Here is how it relates back to Woody Allen: the idea of young or underage women as reasonably inappropriate, but still nominally desirable, is critical to several of Allen's films. Moreover, and perhaps more importantly, in the fantasy role-play scenario of his movies, Allen or his surrogate characters get to transgress that line - without real-world punishment.

It's the fantasy aspect, in fact, that unsettles me the most. The technical details of the relationships in Allen's movies aren't generally, on the surface, considered immoral (or illegal, Manhattan notwithstanding) - though this calls me to question why we don't particularly consider the pathology of an adult male professing an intimate emotional connection to someone decades his junior and on the bottom end of a visible, obvious power dynamic.

But these scenarios and dynamics, in movies, are made up; and as such, can serve as metaphors, allegories, and outright fantasies about other, less "decent" couplings. They can be placeholders for internal monologues about how men want what they want, and might - advisably or inadvisably - "go there" if the circumstances are available. In the stanchions of rape culture, they forgive male sexual action and rigorously position young women as culpable or at least complicit in their exchanges.

In the wider cultural sense, these stories serve as a kind of grooming. They slowly, doggedly normalize an abusive power structure, and provide safe spaces to perform sexual behavior that, under any other circumstances, we'd consider abhorrent.

I've long been a staunch believer in the basic idea that every single aspect of our pop cultural not only has meaning, but has a kind of necessity. It's there because it needs to be: because it is articulating something - an anxiety, a belief, an unutterable fantasy, or something else entirely - that both its creator and consumer needs to grapple with on either a conscious or unconscious level.

Far from declaring an all-out Woody Allen boycott, I'd propose that the strongest response to the Dylan Farrow case would be to use the opportunity to re-interrogate his filmography and examine how those movies normalize tropes that, as ambassadors of broken power structures between men and women, help build situations like the one we had this week, where Allen's only comment on the Farrow accusations are that he is "over it."

There is a lot to learn there, and more importantly, those lessons will need to be applied across a broad swath of pop culture at large. Woody Allen's films aren't documentaries, and art's benefit and burden is in how it creates and evolves ideas about how we live with one another.

I don't feel any particular need to delve into Allen's subconscious by way of his films in order to understand or explain him - nor do I think such things, necessarily, are even possible - but he has unintentionally exposed a keyhole through which we might better understand what myths and reprieves we continue to visit upon men and women through the arts; and why people like Woody Allen continue to assault women and children, and get away with it.

Do you feel this content is inappropriate or infringes upon your rights? Click here to report it, or see our DMCA policy.
Cafe SocietyHusbands & WivesManhattanWoody Allen