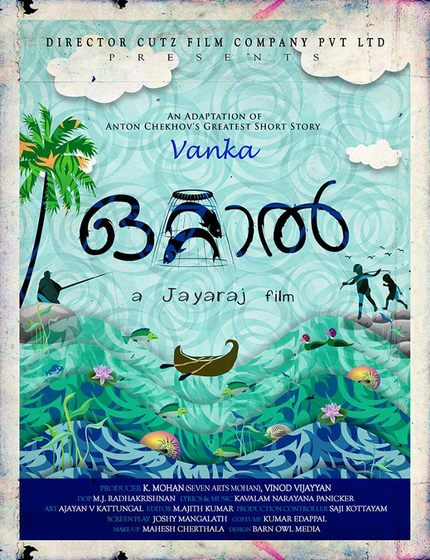 Jayaraj's Malayalam language feature Ottaal (The Trap) begins with a boy writing a Christmas letter to his grandfather. Kuttappayi, the boy in question, writes this letter in the dark, obviously past his own bedtime and in secret. His miserable conditions are a mystery, but we are soon led down the path he traveled toward his current predicament, and what a tale it is. Ottaal is the story of a boy from whom joy and imagination are wrested and replaced with resignation and sadness, and how quickly one turns to the other.

Following the late night letter writing, we're dropped into the lush marshlands of Kerala, where Kuttappayi and his grandfather are making the daily pilgrammage to herd ducks from one port to another. Kuttappayi's parents are dead, victims of a system that sought only to imprison them in a web from which their is no escape. The task of raising the young boy falls upon his grandfather, Valyappachy (Vasudevan), who has little to call his own, but gives it all to the young boy who is  visually bursting at the seams to tackle all that life has to offer.

Kuttappayi spends his days tending the ducks and doing whatever little odd jobs his grandfather needs him to do. Learning from and living off of the land, Kuttappayi has the kind of idyllic life that would make Huckleberry Finn and Tom Sawyer proud. At eight years old, Kuttappayi has been taken out of school because his grandfather can't afford to pay the fees, but he soon meets up with another young boy, Tinku, of significantly higher means and they strike up a symbiotic friendship.

Tinku enjoys Kuttappayi's free spirit and envies his enthusiasm for the world, while Kuttappayi's envies Tinku's sharp looking school uniform and longs to sit in on classes with him. Together, they form a bond that only young children can enjoy. Kuttappayi selflessly helps his well-to-do friend succeed in spite of the latter's family's objections. Tinku's mother sees a genuine curiosity and desire to learn in Kuttappayi's eyes that she wishes she could nurture, but her husband insists upon separating the boys as much as possible. Soon enough, Kuttappayi's indulgences toward Tinku in the classroom get the rich boy in trouble and they are forced apart, even as they grow close enough to almost solidify their bond.

This separation is a theme that runs through Kuttappayi's life, one that his indomitable spirit fights at every turn. Separated from his parents by death, from his friends by their parents, and ultimately from his loving and beloved grandfather by illness, Kuttappayi is still young enough to see that the road ahead of him is long, and that any setback is only temporary. Even though the boy is among the most tragic film characters in recent memory with his incredible string of bad luck, he knows no other life but to get back up and dust himself off. Surely the good life sits just around the next corner.

Ottaal is a powerful film. A film that emphasizes the capacity for hope in a world that attempts to crush it at every turn. A film that builds its hero into a beacon of positivity in a sea of bad options. Ottaal both challenges by faith in humanity and restores it, all in the space of eighty-one minutes. Ottaal makes me both grateful not to be have been born poor in India, and sad for the opportunities missed. Ottaal is the kind of film that, even though it leaves its audience on a completely dour note, still leaves room for hope by the fact that its hopeless lead always comes out on top. Ottaal managed to wring more emotions from me in its short run time than perhaps any film twice its length has ever managed. That's what I want from my cinema, I want to go on an emotional journey, and Ottaal took me there.

Do you feel this content is inappropriate or infringes upon your rights? Click here to report it, or see our DMCA policy.
ifflaindian film festival lamalayalamottaalJayaraajJoshy MangalathShine Tom ChackoAshanth K. ShahVasudevanDrama