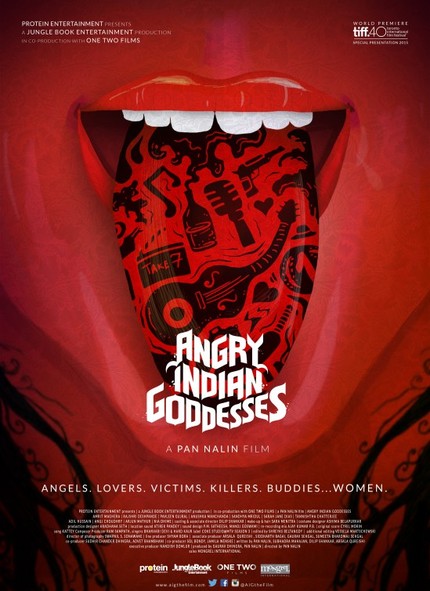 India, like every other film industry in the world, suffers from a significant shortage of films featuring women in leading roles. I'm not talking about women's films, chick flicks, or other films that celebrate women by exaggerating feminity to conform with male fantasies. I'm just talking about regular old movies with leading women who don't have any men to answer to. Even those films that do exist -- think Sex & the City, Bridesmaids, etc... -- largely predicate their existance upon how the women involved relate to men. Thankfully, Pan Nalin's new film Angry Indian Goddesses largely ignores the preset rules about what women's films should be and delivers a film in which women are characters instead of archetypes interacting with one another.

The film begins with several women gathering in Goa at the request of Freida da Silva (Sarah Jane Dias). At first, none of the women knows of the secret reason that Freida has gathered them all together, but quite soon it becomes apparent that it is to celebrate her wedding. Here's where it could take a turn into Stereotype City, but thankfully Nalin and his writers avoid all sorts of terrible, hysterical nonsense and instead focus on these women and their individual stories, rather than a series of set pieces designed to show how crrrazzzy women can get when left to their own devices.

Rather than bragging about their men, or running about trying on dresses, Freida's friends -- singer Mad, businesswoman Su, wannabe Bollywod star Jo, houseiwfe Pammy, and hippie activist Nargis -- go about the business of being human and defining for each other what that means on their own terms. Now, this does turn into a lot of talk about what most would consider women's issues, but it also births real growth between the comrades when the talk turns to sexuality, the rights of the indigenous peoples of India, the dangers of the Bollywood star machine, and the fears tht exist around simply being a woman in India in public. These are the conversations that it would seem women have all the time amongst each other, but often feel uncomfortable having around men.

So, yes, Angry Indian Goddesses is a women's movie, but only because that is a state of being that exists in conflict with the status quo. The women are harrassed, beaten, assaulted, embarrassed, depressed, suicidal, emotionally destitute, and intimidated at every turn. Their very right to walk the streets alone is challenged, for their perceived petulance they are punished, violated, threatened and left to fear for their safety. This is the case for women all over the world, but in India, these violations are granted special proctections by the prevailing culture. Though the nation is one of the world's wealthiest and has one of its most rapidly growing economies, much of the prevailing culture is still markedly patriarchal, to the point where violence against women is often seen as necessary behind closed doors to keep them in line.

To wit, Angry Indian Goddesses, a film about women acting like human adults, was cut by the CBFC, the Indian censor board, for celebrating femine power in a way that aligns with Hinduism. The opening title sequence was cut for what was seemingly seen as anti-Hindu imagery, and language was muted for not being demure enough. One such like was muted simply for referring to a particularly sexy man as "lunch". Yes, the word "lunch" was censored. This is a film about feminine empowerment -- and I refuse to say "female" because they are not another species to be studeied -- that was censored for daring to have women that speak like women, and men, and children, and anyone with a tongue, speaks.

Pan Nalin has stated that his film is not a feminist one, and while many might take issue, I tend to agree. While the film focuses on women and their struggles to simply exist on an equal playing field with everyone else, it does not victimize them, there are no "woe is me" tales of desperation, there is only the strength and power in these women that if they were men, would be no big deal. The film does take a nasty turn toward the end, and the final scene has a bit of a perplexing Spartacus vibe, but in the grand scheme of things, these are minor digressions.

Angry Indian Goddesses is a great film in which women are shown to be people. I only long for the day when such an endeavor is no longer revolutionary.