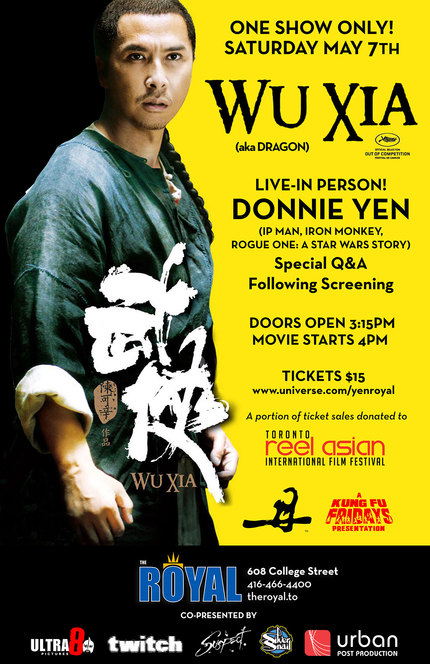 Hey Toronto action fans! Iconic martial arts star Donnie Yen will be making a very rare public appearance in Toronto - so rare that I actually believe this is the first time he's ever done it here - when The Royal screens Wu Xia (aka Dragon) on May 7th.

Action fans rejoice! International superstar Donnie Yen (the Ip Man trilogy, Hero, Rogue One: A Star Wars Story) is coming to The Royal to meet his fans for an unforgettable afternoon of kung-fu chaos.

Donnie Yen will introduce a screening of his acclaimed martial arts epic Wu Xia (2011). Fans will also have a chance to hear Yen discuss his long career during an onstage Q&A with Colin Geddes, programmer of The Royal and of TIFF’s Midnight Madness selection.

Doors will open at 3pm for a 4pm start and if you want a chance to attend for free we've got a pair of tickets to give away to a lucky ScreenAnarchy reader. You want your chance? Email me here and name one title - other than Wu Xia - to net Yen a Best Action Choreography award at the Hong Kong Film Awards.

Tickets are sure to move fast for this one so if you don't want to gamble on winning a pair I would very strongly recommend buying in advance. You can order them online here now.