It's a fact that's very easy to take for granted, especially if you've been living here for a long time, but New York is a city that offers nearly unlimited pleasures for movie fans, serious cinephiles and casual moviegoers alike. The city's repertory scene especially bears this out, where on a daily basis one can either revisit a cherished classic or seek out something more obscure or unfamiliar.

One institution that has consistently offered rewarding cinematic experiences for decades, and has especially done so in recent years, is Japan Society, where for just the price of a few film tickets, one can both get a graduate-level education on cinema and have a great time at the movies. Whether highlighting Nikkatsu action films, yakuza movies, and the avant-garde works of the Art Theatre Guild, or surveying the oeuvres of Sabu and Obayashi Nobuhiko, Japan Society’s film programs do a great job of curation and putting these works in historical and social context.

These virtues are delightfully demonstrated in their latest film series, “Japan Sings! The Japanese Musical Film,” screening from April 8-23. This 10-film survey, all screening in 35mm, illuminates a corner of Japanese cinema that, aside from dedicated experts, is known to relatively few outside of Japan. What makes this series - curated by professor and film scholar Michael Raine - a must-see is the inclusion of films from the 1950s and 1960s that are very rarely shown in this country, if ever. That fact alone makes it worth the trek, but as a bonus, these films offer the wonderful pleasures of lively atmospheres, catchy tunes, clever satire, and attractive actors and singers.

Click through the gallery below for my recommendations of particular series highlights. For more information on these and other films being screened, and to purchase tickets, visit Japan Society’s website. 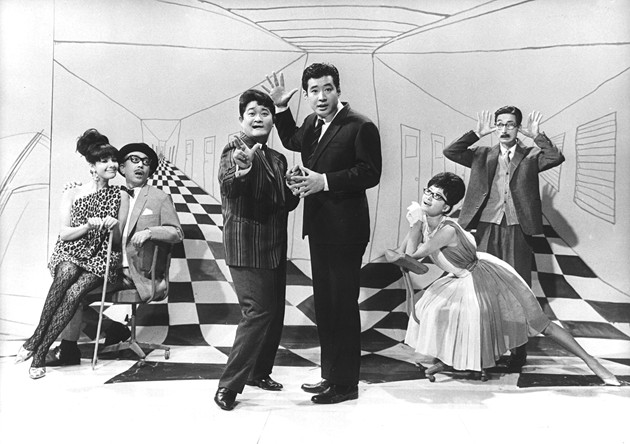 YOU CAN SUCCEED, TOO (Eizo Sugawa, 1964) *OPENING NIGHT FILM

The run-up to the 1964 Tokyo Olympics forms the backdrop to this lively, charming workplace musical, which, out of the films screening in this series, comes the closest to the Hollywood-style musical. Japanese musicals were typically more like jukebox movies, in which seriocomic plots with regular dialog were periodically interrupted with songs by the popular singers who starred in them.

In You Can Succeed, Too, two rival tourism companies compete for foreign clientele, trying to one-up one another in landing the most lucrative deals. We mostly concentrate on one of these companies, and in particular on two salarymen who strive to get ahead in the atmosphere of cutthroat corporate shenanigans and the pressures placed on them by their superiors.

The film's central setpiece is a lavish, Busby Berkeley-esque number in which the company president's daughter (Yukimura Izumi) extols the virtues of American society and the American way of conducting business, especially its premium on individuality: "In America, you are yourself and others are others." However, another line of the song takes on a particularly sharp edge for today's viewers: "In America, guns are freely for sale." Plus ca change, plus c'est la meme chose. 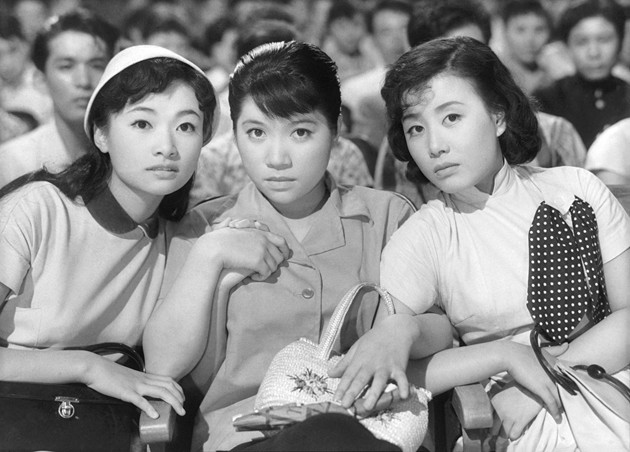 My personal favorite of the films I was able to preview, So Young, So Bright features the songs, and considerable charms, of three of the most popular female singers on 1950s Japan: Misora Hibari, Eri Chiemi, and Yukimura Izumi. With a wonderfully light touch, and a bright, entertaining atmosphere, the film follows these three "janken girls" - the original Japanese title, referring to the friends' penchant for playing rock paper scissors - as two of them try to rescue the third (an apprentice geisha) from arranged matrimony to a skeevy, bald businessman.

Typical of the beauty of the mise-en-scene is an elaborate fantasy scene in which the three girls each imagine themselves as performers when they are in the audience of a musical show. In the conclusion, these plucky girls manage to make their dreams come true, and in a quietly subversive manner, gain the right to live their own lives on their own terms.

(Interestingly, this film seems to be a relatively early example of the extensive use of obvious product placement. Look for lots of scenes featuring Meiji chocolate bars and the movie magazine Heibon.) 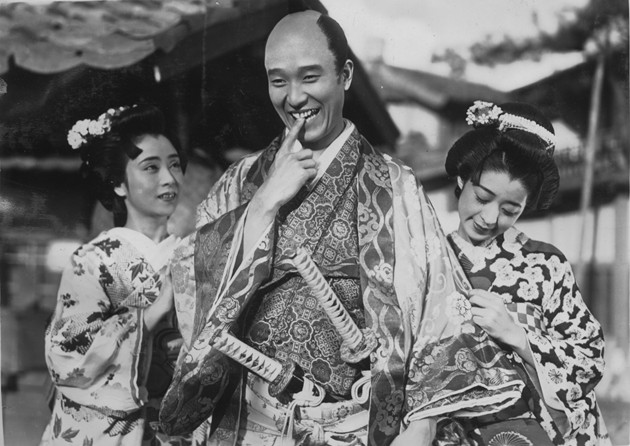 A distinctly Japanese take on the Gilbert and Sullivan-style operetta, Singing Lovebirds, the earliest film in the series, rather anachronistically mashes up modern jazz music with the samurai swordplay movie. Here, a ronin, a samurai-turned-umbrella salesman-turned-amateur antiquities collector (played by Shimura Takashi, of Seven Samurai fame), and his beautiful daughter (Ichikawa Haruyo), are involved in a jauntily performed scenario involving arranged marriage, courtship, and the pursuit of wealth. The utopian denouement involves Oharu and her father rejecting material wealth for the more lasting and valuable treasure of true love. 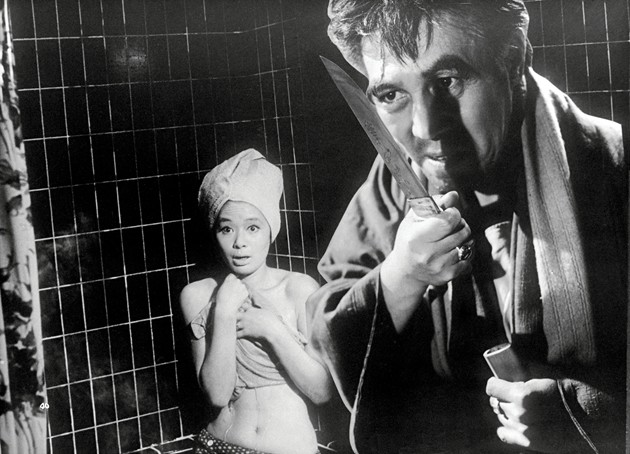 The most radical, avant-garde film in the series (along with Oshima Nagisa's 1967 feature A Treatise on Japanese Bawdy Songs aka Sing a Song of Sex), new wave director Okamoto (The Sword of Doom, The Age of Assassins) offers a "musical" that finds its rhythms, rhymes and refrains more in its visual and aural editing patterns than in traditional musical genre-based song and dance.

Extremely stylized, almost to within an inch of its life, Oh, Bomb! combines Noh theatrical techniques with direct references to West Side Story to visualize the strange tale of an aging yakuza (Ito Yunosuke) released from prison to find that he has been betrayed by, and pushed out of, the crime family he has devoted his life to. He plots his revenge, with his chauffeur and his dynamite-loving cellmate in tow, leading to a conclusion that more than fulfills the (literally) explosive potential hinted at in the film's title. And if its pleasures are ultimately more intellectual than in pure entertainment terms, it's a considerable cinematic achievement and a bracing, unique movie experience nonetheless.

Do you feel this content is inappropriate or infringes upon your rights? Click here to report it, or see our DMCA policy.
Japan SocietyJapanese filmJapanese musicals