Blu-ray Review: ONLY ANGELS HAVE WINGS Soars Via Criterion 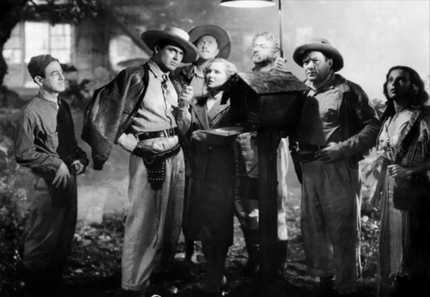 In 1939, that powerhouse year in cinema history so often called its greatest, the indomitable Howard Hawks, made what may well be his most defining picture, Only Angels Have Wings.

A nail-biting aviation actioner, Only Angels Have Wings soars on the notion of good men doing their jobs, even when - especially when - that job involves mortal danger. A wartime flier himself, the film is palpable in its authenticity to the process: Certain planes pulling certain ways; the rugged brotherhood of co-workers; and above all, the unspoken aviators code of honor.

Set in the fictitious South American port town of Barranca, Cary Grant leads a ragtag group of mail delivery aviators. Risking life and limb on a regular basis, these are professionals with a death wish, living by the ancient passage adopted by the United States Postal Service, "Neither snow, nor rain, nor heat, nor gloom of night, stays these couriers from the swift completion of their appointed rounds."

Of course, they left fog off the list, an early deadly threat to one of the flyers. The sequence is one of pure dread, staged primarily from the ground; the pilot's boss and coworkers helpless to prevent imminent disaster. It's night, and the pea-soup fog is hazardously thick. Young Joe (Noah Beery, Jr.) has been tapped to make the high-stakes delivery flight. This being the perfect opportunity to impress the fetching newcomer Bonnie Lee, played by a radiant Jean Arthur, Joe unquestioningly takes to the air. And besides, it's his job.

On the ground, Joe's boss, the hardened Geoff Carter (Grant) holds court around an exterior call box, trying in vain to talk Joe back to the landing strip. Joe's disembodied voice over the call box takes on an eerie monotone. Never mind that such an inflection was commonly deliberate of aviators of the day in an effort to talk through regular radio interference – Hawks utilizes the effect for all its ghostly worth. Grant and company stare out into the brilliantly lit environs, searching in vain for the increasingly lost plane. Their position is one of pure helplessness. “Pull up, pull up, Joe!!” Not soon after, Geoff will callously explain that Joe didn't make it because he wasn't good enough. It hurts him too deeply to see it any other way.

Amid the tension of the call box sequence, Grant remains the very model of staunch masculinity. This despite his wardrobe (and here's where it gets most interesting), and the way he wears it: A flat straw sombrero. Pants pulled up to his ribcage. An overly studded gun belt and holster. And the kicker: A cool leather jacket… draped over his shoulders. Only Angels Have Wings is no comedy (although it's actually full of alluring levity, camaraderie, and charm), though on anyone else this getup would be downright clownish. But somehow, not on Grant. 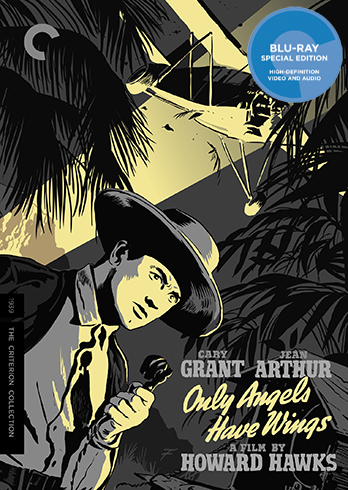 In a film full of memorable moments, this sequence is the most iconic. When one first thinks of Only Angels Have Wings, it's Grant in this scene that likely springs to mind. The challenge to Criterion then was how to include this on the cover of the case, but also communicate that it's about aviators. Illustrator Francesco Francavilla found an excellently eye-catching solution in his cockeyed forced-perspective rendering of the actor on the horn with a dipping plane overhead. Another poster-worthy piece of cover art from Criterion.

In one of the blu-ray's bonus features, noted film critic David Thomson speaks to various perceptions of Grant's character. (And how appropriate is it that they got the critic with the unplaceable accent to discuss the actor with an unplaceable accent...?) Thomson observes that today's younger viewers have a hard time reading Grant's Geoff as anything other than gay. Certainly there are lines here and there that could be interpreted to that end. When Bonnie asks Thomas Mitchell's character, who is Geoff's closest friend, if he loves him, he can only admit that he does. She asks, “What do you do when he doesn't come back when you expect him to?” “I go nuts”. Yet, that's precisely the kind of subtext that Hawks' filmography has proven no interest in. This is manly men (as unlikely as they may seem) and snappy Hawksian women (beside Arthur, the other is Rita Hayworth, in a breakout supporting role as Barthelmess' concerned wife with a past) giving us all they've got: Action, romance, laughs, texture, even a song of two.

The persistent uncompressed hummmmmmmmm of airplane propellors is a lulling soundscape, one rife with risk, awe, machismo, and duty. The purely Hawksian notion of men who will risk it all simply because it's their job isn't something contemporary Hollywood expects viewers to relate to. Case in point, as satisfying as Tom Cruise's Mission: Impossible films are, super-spy Ethan Hunt must truly be thrust into action for personal reasons (most of the time involving the death of a fellow agent). Even James Bond, in the sworn service of Her Majesty the Queen, has gotten all too personal as of late.

The fact that this trend has been on the rise since the late 1960s is no surprise. That's when the film industry unceremoniously put old man Howard Hawks out to pasture before his time. An unfitting fate for the man who gave us Rio Bravo, Scarface, Gentlemen Prefer Blondes, His Girl Friday, Bringing Up Baby, Sergeant York, The Big Sleep, and the only other Hawks Criterion to date, Red River. Hawks would never be one to claim auteurism, but of all his films, Angels is the one that best distills his philosophies, his touch, and his worldview. Hailing from a year of great films, Only Angels Have Wings continues to fly high.

Criterion's 4K restoration of Only Angels Have Wings is a beautiful testament to Joseph Walker's layered, sumptuous black and white cinematography and the intricate detailing of the damp and dark life in Barranca. You'll not only swear that it's a real place, but that parts were filmed there. With the exception of some select breathtaking ariel footage (by Elmer Dyer), it was all conceived on a very convincing California soundstage.

Extras are respectable if a little thin, which is admittedly a minor letdown, considering that this disc supplants a very recent TCM Vault release of the film. That said, the new blu-ray transfer is head and shoulders above the previous Columbia DVD, and likely above the TCM release as well. Here's what you get:

- Audio bits from a 1972 conversation between filmmakers Howard Hawks and Peter Bogdanovich. Not the liveliest of chats, but a worthy extra all the same. It runs about 20 minutes.

- A new interview with film critic David Thomson, probably the most meaty analysis of Hawks and his process on the disc.

- Howard Hawks and His Aviation Movies, a new program featuring film scholars Craig Barron and Ben Burtt. A terrific detailing of the aviation side of things depicted in the film. Get ready to learn what's what about pilot life circa 1939.

- Lux Radio Theatre adaptation of the film from 1939, starring Cary Grant, Jean Arthur, Rita Hayworth, Richard Barthelmess, and Thomas Mitchell, and hosted by filmmaker Cecil B. DeMille. Most of the film's cast returned for this radio adaptation, the sort that were so popular at the time. These vintage radio dramas are always great to have as part of the package.

- An essay by critic Michael Sragow, which is nice and long and adorned with more Francesco Francavilla illustration.

Only Angels Have Wings may not be Howard Hawks' most famous film, or even his greatest. But it does rank awfully high for him, and for Cary Grant and the rest of cast, who are all in top flight mode.  It is the greatest summation of Hawks, who he was, and why he matters so much to movies.  In many ways, it makes perfect sense for Criterion to add it to their collection. I enthusiastically tip my straw sombrero in their direction.

(The stills included in this review were not necessarily sourced from the Blu-ray, and are provided as reference to the film itself.)

Only Angels Have Wings