Trailer: In FAN Shah Rukh Khan Obsesses Over Himself 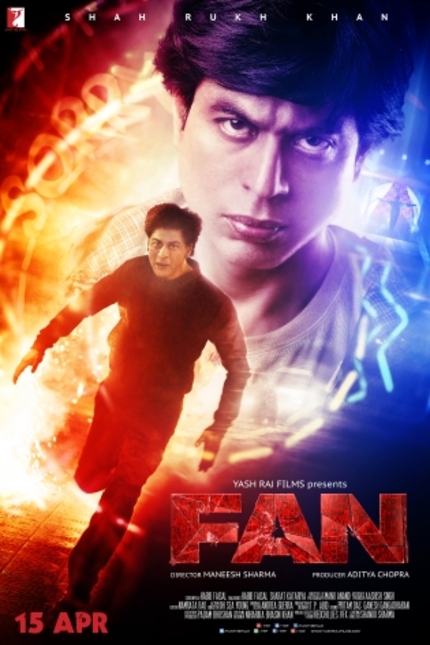 Bollywood's biggest international movie star, Shah Rukh Khan, return on April 15th with his latest film and this one looks pretty interesting. Maneesh Sharma's Fan follows the story of a young man named Gaurav (Khan) who is obsessed with Bollywood's biggest movie star, Aryan Khanna (also Khan) and begs for the opportunity to be in his presence. When his prayers are answered and Khanna turns out to be more human than God, things go pear shaped and the chase begins.

It's not a particularly novel story. The concept has already been explored many times over, including in the 1996 film The Fan with Robert DeNiro and Wesley Snipes. However, I don't know if this particular story has been attempted with the same actor in the role of both admirer and admired. SRK plays Gaurav with the help of a lot of prosthetics and presumably a healthy amount of CG to de-age him, but you can already see from the trailer that the acting beneath the makeup is pretty convincingly insane.

This also wouldn't be the first time that SRK has portrayed an obsessive character. One of my favorite '90s Bollywood films is Yash Chopra's Darr, in which Khan plays a college student involved in a deadly obsession with a classmate (Juhi Chawla). That film was one of Khan's breakout roles, and in it he managed to take the spotlight from the hero, Sunny Deol, and come out as one of the biggest stars in the world way back in 1993.

Fan shows the potential to recreate some of Darr's magic with both of SRK's performances. I'm a big fan of crazed Shah Rukh Khan on film. Over the last 15 years he has oscillated back and forth between patriarchal and romantic roles, but in 2013's Chennai Express he played a version of his '90s self: angry, violent, and short tempered. While that film was a bit of a disappointment, it was great to see Khan covered in blood and walking away from explosions again.

With Fan, I expect we'll see more of this Shah Rukh Khan, and less of the serious actor he's not that good at. It also wouldn't be the first time that this major movie star has played a major movie star on screen. One of his most famous films, 2006's Om Shanti Om, features Khan as a Bollywood idol seeking revenge for damage done in a previous life; there is also 2009's Billu Barber, in which Khan plays a movie star, supported by clips from his own filmography (a trick reused in Fan), so he is well-versed in meta stardom.

I'm definitely looking forward to Fan. Even in mediocre films, SRK's charisma is difficult to fight, and I tend to enjoy his performances. Fan releases worldwide on April 15th, check out the English subtitled trailer below.