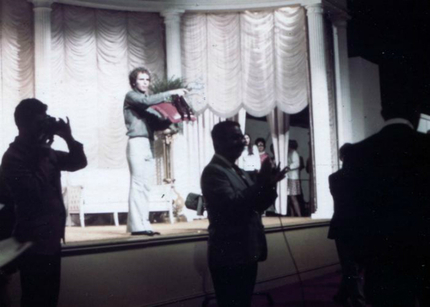 The shoes in questions were made for Judy Garland in The Wizard of Oz, but the true, fascinating, ever more complex world of The Slippers begins in earnest after she took them off.

Granted, the new documentary by Morgan White probably starts off on the wrong foot by recounting its setup in a pedestrian, expected manner: the popular books by L. Frank Baum, the movie, its incredible popularity, Judy Garland and the red shoes, blah blah blah. Dedicated classic film fans have heard it all before.

A tiny bit of patience is rewarded, however, once the focus narrows to the iconic red shoes in the context of the decline of the Hollywood studios in the 1960s. No longer able to sustain their expansive collection of costumes, props, and sets in Los Angeles, the studios began selling them off. That era climaxed, sadly, when MGM, the biggest studio of them all, was sold to investor Kirk Kerkorian, who then began selling off the studio's assets in piecemeal fashion in 1970.

More than 40 years later, it's jaw-dropping to watch footage of those voluminous assets, not just the huge lots for production exteriors and dozens and dozens of vehicles and houses and other buildings, but also thousands and thousand of pieces of furniture, not to mention thousands and thousands of costumes and props. The auction of those assets took weeks to complete, and were epitomized by the sale of Dorothy's ruby slippers for the princely sum of $15,000.

At the time, it was the highest price ever paid for a piece of Hollywood memorabilia, a market that most people didn't even know existed. The shoes ended up on display at the Library of Congress, enshrined as a museum display, and viewed by thousands. That's where the official story might have ended.

Documentarian White weaves a number of strands together. He gives due consideration to Kent Warner, a costumer who had a great appreciation for classic Hollywood. Given the opportunity, he began plucking costumes, props, and shoes out of dusty warehouses, amassing a huge, undocumented collection. Was he a preservationist or a thief?

The film also includes interviews with other collectors, and their sometimes bitchy, sometimes admiring comments about their own collecting habits, and the taste of other collectors, is fascinating in itself. that leads to another fascinating thread, namely, Debbie Reynolds, and her expansive interest in collecting for the sake of preserving and honoring old Hollywood.

It turns out that multiple pairs of shoes were made for Dorothy in The Wizard of Oz. Those shoes began showing up for auction and sold at increasingly staggering prices. Who were the buyers, and why were they compelled to pursue the slippers? Their stories are told as well.

The Slippers reminded me of how author and journalist Shawn Levy once described his wonderful nonfiction books, something like: 'You need a clothesline that's strong enough to last throughout the book. Then you can throw everything else you want to talk about onto the clotheline.' That's what Morgan White has done.

Starting with a pair of shoes that had, at best, a supporting role in a famous production, he then explores the psychology of collectors, the history of Hollywood, and the explosion of interest in memorabilia, as well as other related items of interest. All those threads are assembled in a compelling fashion, making The Slippers a surprisingly enjoyable and edifying experience.

The film enjoyed its world premiere earlier today at SXSW. It will screen three more times during the festival.

Do you feel this content is inappropriate or infringes upon your rights? Click here to report it, or see our DMCA policy.
documentaryMorgan Whiteruby slippersSXSW 2016The Wizard of Oz