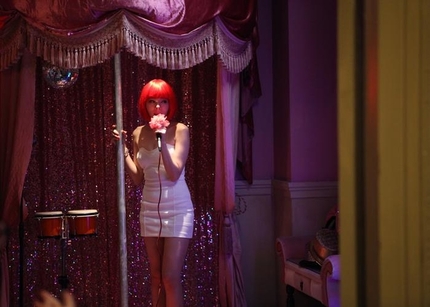 In Korea, few things are more important than karaoke. With thousands of karaoke bars, open all hours, littering every corner of the country, it's an activity that reaches every part of society, servicing hoards of stressed salary workers, bored teenagers or oftentimes a more licentious clientele. Karaoke is a frequent feature of Korean films, but in Karaoke Crazies, Korea's national pastime comes out front and center, serving as the focal point of an infectious blend of drama, comedy, thriller and absurdity.

Addiction Karaoke (the Korean title of the film) is a quiet bar in the countryside with almost no clients. To boost his business, the owner hires a singing helper, a strange girl who wears a green tracksuit, seldom speaks and always plays video games. Despite her antisocial behavior, business steadily improves, though the reason remains a mystery to the owner, and he hires a gregarious second helper who also becomes a hit with clients. Meanwhile, a local officer stops in from time to time warning of the presence of a serial killer in the region.

Karaoke Crazies takes place almost exclusively in an intricately designed karaoke bar that calls to mind some of the sets used in Park Chan-wook's Vengeance Trilogy and the film gleefully glides through genres in a manner not dissimilar to the modern cult classic Save the Green Planet (2003). What separates it from its stylistic progenitors is the beating heart at its core that turns the unlikely ragtag team of bar staff (which also comes to include a silent giant) into a loving family. Staff members all have a backstory, each darker than the last, that has brought them to Addiction Karaoke, and by finding each other they've found a way to ease the pain each of them carries.

Leading the cast is Lee Moon-sik, a well-known mid-2000s actor (A Bloody Aria, 2006) who hasn't been seen on screen since 2012's Miss Conspirator. As the hesitant and frustrated bar owner, his is a familiar character yet Lee personifies him with a quiet humanity that turns him into the unlikely father figure of his group. As for his employees, Bae So-eun (Doctor, 2012) is effective as the very odd and silent first helper while Kim Na-mi (B.E.D., 2012) creates a lively counterpoint with her far more professional bar hostess.

The film also marks a return for director Kim Sang-chan, who debuted with 2007's comedy-drama Highway Star and hadn't been heard from since. Exploring his set with a cautiously mobile camera, Kim's work is highly stylised while never allowing the mise-en-scene to overwhelm the drama at the heart of his story.

The only thing going against Karaoke Crazies is that it may lean a little too much on its Korean genre predecessors. Beyond the stylistic influences already mentioned, you can also see a through line all the way back to Kim Jee-woon's debut film The Quiet Family (1998). Yet the winning charm on display here more than makes up for the film's vague feeling of familiarity which, at worst, comes off as a pleasant jolt of nostalgia for the early days of the Korean film renaissance.