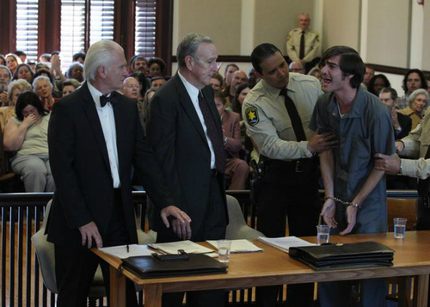 In October 1981, Sister Tadea Benz, a 76-year-old nun, was raped, strangled, beaten and stabbed to death. Johnny Frank Garrett, age 17 at the time the crimes were committed, was later convicted. He was executed in February 1992, one of more than 500 people who have been executed in the state of Texas since 1982.

His case was examined in the 2008 documentary The Last Word by Jesse Quackenbush, which argued for Garrett's innocence, and serves as the basis for a new fictional feature, Johnny Frank Garrett's Last Word, directed by Simon Rumley.

The film quickly introduces fictional elements. Adam Redman (Mike Doyle, The Invitation) finds himself the lone holdout on a jury that very much believes Garrett is guilty. Redman raises reasonable questions that are all shouted down in the jury room, and he soon acquiesces. Garrett is sentenced to death.

Ten years later, Garrett writes out a lengthy final statement in his jail cell, then spits out a vengeful diatribe against anyone who had anything to do with his conviction before he is executed. The execution reawakens guilty feelings for Redman, now married with a 10-year-old son. Those feelings are exacerbated when Redman learns from a news reporter that two women connected with Garrett's conviction -- a fellow juror and a former teacher -- have died in violent circumstances.

Redman begins experiencing nightmares and eventually comes to believe that Garrett has somehow placed a curse on those he held responsible for his unjust death. His wife Lara (Erin Cummings) is sympathetic to a point, though her loyalty is tested when Redman begins taking giant leaps. Is he losing his mind or is it really possible that Garrett is exacting his revenge from beyond the grave?

Rumley and his key collaborators from the past few years -- cinematographer Milton Kam and editor Rob Hall -- work very hard to inject suspense and thrills into the material that's been conjured up by screenwriters Ben Ketai and Marc Haimes (Ketai is credited for the story along with Tony Giglio). Simon Boswell's impressively dark musical score pulsates in a disturbing manner.

Yet the movie doesn't take flight easily into the realm of terror, remaining tethered to the possibility that deeply-felt injustices were committed. The seeming desire to be respectful to its real-life origins weighs the film down; it's as though it wants to be a full-blown horror movie, but doesn't want to offend anyone. That undercuts some of the tension that eventually develops. (It should be noted that the film does not shy away entirely from bloody and violent imagery.)

In his past films, including The Living and the Dead and Red White & Blue, Rumley has demonstrated a deft ability to create distinctive -- and very creepy -- environments for his characters. That's again evident here, though it's undercut because Redman and his family are defined in more stereotypical terms and, when the madness kicks in, it's not as unexpectedly demented as it was in his earlier features.

The film had its world premiere at SXSW tonight. It plays twice more during the festival.