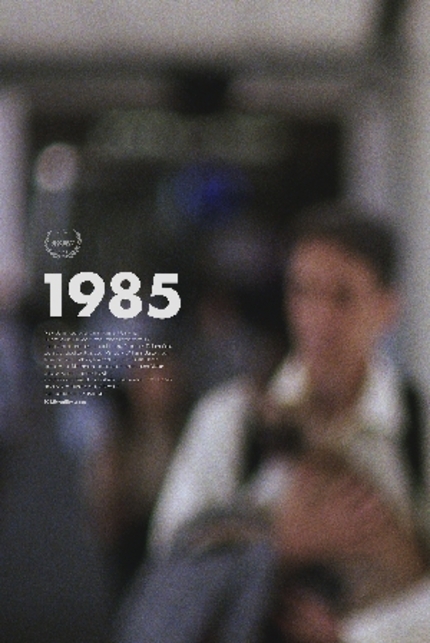 A little past two in the morning, I began weeping. I blame filmmaker Yen Tan.

His short film, 1985, screens today at SXSW, but Mr. Tan kindly made it available for me to watch in advance. Though I'm sure it will look much nicer on a big screen, I'm grateful I had the opportunity to experience it, even on a small screen, so I can describe the absolute brilliance of its opening, as well as its overall impact.

(I hope this will not spoil it -- the film is quite short -- but just in case, please be advised that the next paragraph details the opening minute.)

We see a living room in a house. We can detect a man sitting in a chair, his back to the camera. We can see a lesion or a tumor on his arm. The phone rings. An answering machine picks up the call and two men happily request that a message be left. The voice of an older woman can be heard. She says something like, "I hope you're feeling better." We take note of the titular year. We add two plus two in our head, because we're smart like that.

The first question that arises after that deceptively simple opening is also simple: 'Where to go from here?'

Anything more than that would definitely be a spoiler -- the film runs barely eight minutes -- yet every moment, every word, every gesture, every camera movement, every cut is entirely authentic and strikes precisely the correct chord. In a soft, gentle, and altogether deft manner, Tan and actors Robert Sella and Lindsay Pulsipher communicate volumes, like a proverbial ocean that springs from a single tear.

And so other associated memories began to flood into my mind, which is what certain films are capable of doing, poignantly bringing forth my own tears.

The world premiere of 1985 screens later today as part of the Texas Shorts Competition. The program will screen twice more during the festival.

Do you feel this content is inappropriate or infringes upon your rights? Click here to report it, or see our DMCA policy.
Lindsay PulsipherRobert SellashortSXSW 2016Yen Tan