Review: THE WAVE, A Sweeping Piece Of Entertainment 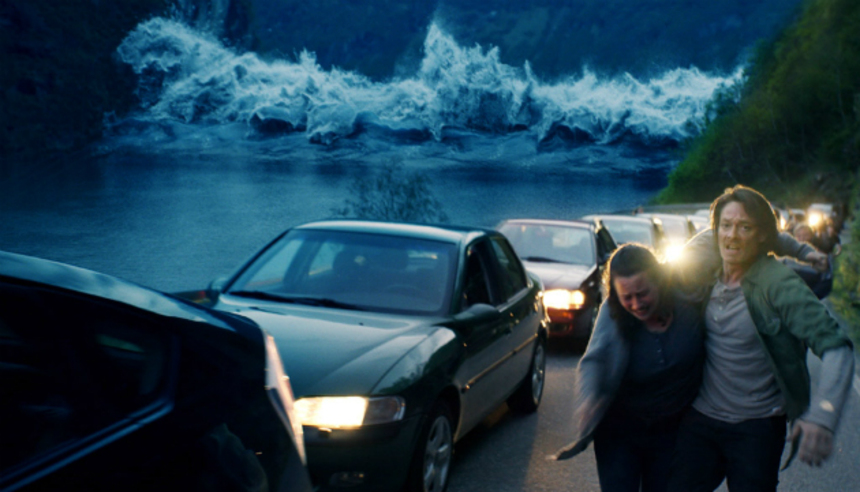 Since first appearing on the scene with Cold Prey in 2006, Norwegian director Roar Uthaug - not pronounced how it looks to English speakers but an awesome name, nonetheless - has earned himself quite a reputation, thanks to his ability to blend spectacle with character.

A shamelessly commercial director who consistently delivers movies meant to be seen by the masses, Uthaug consistently over-delivers on the character side as well, with film after film putting equal care into the depth and believability of the people populating them as they do into the big, splashy trailer moments. Uthaug may not be a Spielberg - not yet, anyway - but he is very much cut from the same cloth, in that while he chooses to aim for the masses, he's also got the sort of technical, narrative and emotional chops to deliver awards, should he choose to do so. And it's that blend of skills that makes him such a perfect director for disaster epic The Wave.

Kristoffer Joner plays Kristian, a geologist at an early warning system monitoring a slowly growing crack in the mountains overlooking the fjord at Geiranger - a hugely popular tourist destination. And why might such a thing need monitoring? For the simple reason that - and this is very much a real life issue - should a significant rockslide tumble into the fjord, the resulting rush of water, as channeled by the narrow walls of the canyon, can - and has - erupt in a massive tsunami, towering over eighty meters high, spreading destruction throughout the region. And while Kristian and his family are on the literal eve of a move out of the region to new jobs in a new home, he cannot shake the feeling that something bad is brewing. And he is, of course, correct. 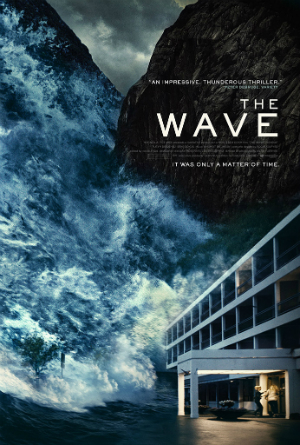 Let it be said right from the outset that if you've ever seen any significant disaster film, you are now most likely convinced that you know what is coming next. And you are correct. The Wave is very much a formula film, one that hews to a very clear template. There are rules to the disaster genre and Uthaug knows them all very well. But the reason those rules exist is that when followed well they can pack an enormous wallop and Uthaug follows them very well, indeed.

At the core of the story is a remarkable cast. Joner is widely regarded as not only one of the finest actors in Norway but in all of Europe, a consistent and highly sought after player of the highest caliber, and he is paired here with Ane Dahl Torp - lesser known outside of Norway, but a huge star within those borders - Thomas Bo Larsen and a slew of similarly gifted performers, all of whom deliver.
The script is lean and efficient when it needs to be while also recognizing when to take a beat and let the characters breathe a bit, and moves at a cracking pace as it moves from Kristian's early suspicions, to the confirmation that he is correct, to the disaster itself, and on to his panicked search through a devastated land to learn if his wife and son are alive or dead. And then there is the disaster itself. A film like this is nothing if the spectacle element is not spectacular and this, simply put, very much is.

A sweeping piece of entertainment that knows exactly what its audience wants and then proceeds to deliver exactly that, The Wave is grand scale entertainment for the masses. That it is already both a monstrous commercial success in Norway and the country's official submission for consideration as the Best Foreign Language Film at the upcoming Oscars speaks volumes as to the skills of its creator.
Review originally published during the Toronto International Film Festival in September 2015. The film opens in select theaters in the U.S. on Friday, March 4, via Magnolia Pictures. It will also be available to watch via various Video On Demand platforms.
Tweet Post Submit

Do you feel this content is inappropriate or infringes upon your rights? Click here to report it, or see our DMCA policy.
Ane Dahl TorpbolgenKristoffer JonerNorwayRoar UthaugThomas Bo Larsentsunami

More about The Wave