Rotterdam 2016 Review: PATHS OF THE SOUL Shows Purpose In Pilgrimage 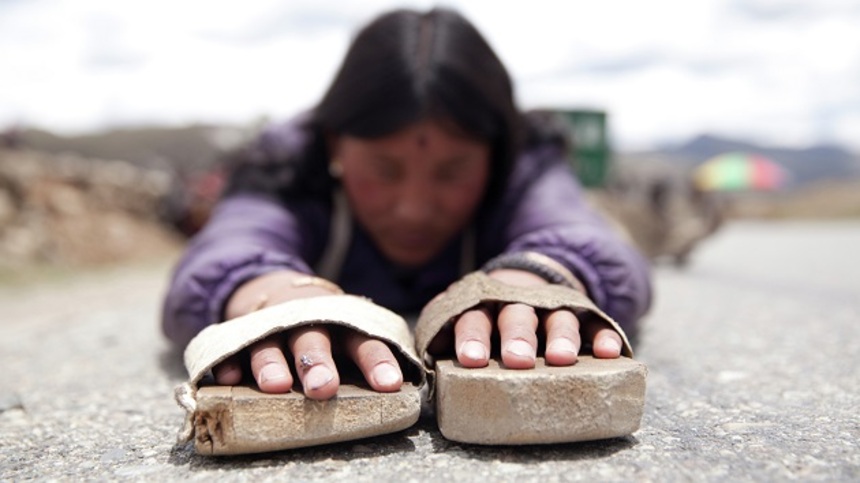 Years ago, when Blu-ray was a new platform and newly acquired by me, I searched the world for the most spectacular discs to play. Be it the US-release of Baraka or the Hong Kong release of Red Cliff, I'd import it. But few discs were as stunning as the Chinese documentary series Asian Corridor in Heaven from 2007, which showed the (then) current travel over the old trade routes through the Himalayas. While the discs are in 1080i instead of 1080p, and some of the camerawork looks washed out due to the intense UV at the snowy heights, most of the footage in it is so often jawdroppingly gorgeous that the boxset is still one of my dearest possessions in my collection.

In fact, each one-hour episode is spectacular enough to make a feature-length film about, except for those where a film already exists. Indeed, the episode "The Himalayan Salt Trek" would make one hell of an extra to Eric Valli's 1999 film Himalaya.

But one other great episode is "Road to Pilgrimage", which shows the incredible journey of several pilgrims to Tibet's capital of Lhasa, a trip of well over a thousand kilometers, done on foot. And as the pilgrims need to prostrate themselves every eight steps (!!!), they diligently use their knees, elbows and foreheads too.

Exactly such a trip can now be seen in the cinema, in dramatized form, in Zhang Yang's film Paths of the Soul, which also played last week at the International Film Festival Rotterdam. A group of inhabitants of a small mountain village in Tibet decide to go on a Buddhist pilgrimage to Lhasa, and you get to see the preparations and the trip itself. And that's basically it. Thing is, there is no such thing as "basically it" in a Himalayan Buddhist pilgrimage. The whole procedure is so bizarre, grueling and time-consuming, that you cannot help but stare at it in disbelief. And whenever your eyes do wander away, there is the stunning landscape of the Himalayas to look at.

As this is a dramatization, the script allows Zhang Yang to carefully select people with different backgrounds for his group of pilgrims. There is the old man who has never left his village in his life, and wants to go to Lhasa to see something of the world. There is the drunk butcher, who hopes the pilgrimage will cure his alcoholism, and who knows that the family he neglected will be properly cared for by the village during his absence. There is the young couple, who hope their baby will be born during the journey. There is the farmer, who wants to show his heartfelt atonement to the families of two craftsmen who died in an accident while working for him. There is the child whose family cannot take care of her, and whose months of being gone will relieve the household.

If this sounds like a set up for some Chinese old-fashioned melodrama, rest assured it isn't. Zhang Yang focuses strictly on the journey, and the resilience of the pilgrims enduring it. No fights break out, and they don't gripe. Each morning, you see the group donning their leather aprons and wooden hand-clogs, as a protection against the endless kow-towing which would otherwise quickly grind them down to the bone. You see them travel each day in procession: first two priests walking ahead, praying and alerting oncoming traffic, then the pilgrims, endlessly chanting incantations for the well-being of all mankind, lying down on their bellies and touching their foreheads to the tarmac every few meters... And finally, following the pilgrims, there is a small tractor with the tents and supplies. You watch them set up camp in often extremely inhospitable spots, you see them eat, pray, discuss the merits of the trip, sing, phone home (using deliciously anachronistic-looking iPhones) and sleep. When someone becomes ill or injured, they wait until he or she gets better, be it for days or weeks. When money runs out, they stop for a month and do hard labor to earn money for the remainder of the trip.

All in all the group travels about 6 miles a day, on a voyage well over 1200 miles long. You see waterfalls, avalanches, loose rocks, storm and rain... As the pilgrimage goes on and on and on, using the winding main road through lush valleys and over harsh mountains, you cannot help but feel for the good-natured group, applauding their strength and determination. It's like a real-life Fellowship of the Ring, but without the war. And the film looks so much like a documentary that it is hard to believe that what you're seeing is staged.

Paths of the Soul is a fantastic and refreshingly benevolent look at a different culture, and turned out to be a great crowd-pleaser during its showings in Rotterdam. It got applause after each screening, and the audience awarded it a well-deserved rating of 4.5 out of 5. Paths of the Soul