Review: THEY LOOK LIKE PEOPLE, Terror At Its Very Best 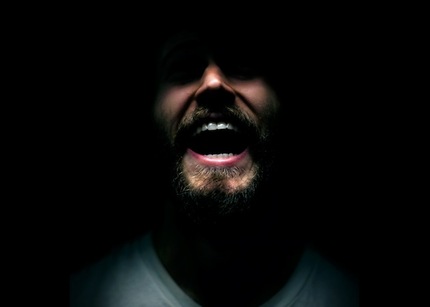 It begins in the dark hollows of your mind. But you can feel it in your heart. Pumping through your veins. The notion that something is wrong. That the world is wrong. That reality is not what it seems. That you are not worthy. And then the phone calls begin. And you're told you are worthy. You are one of the blessed. You must prepare for the coming war against a world that is now hidden, but will soon be revealed to be full of monsters. Your friends, your lover... they are all monsters. They only look like people.

This is the nature of director Perry Blackshear's feature debut They Look Like People. The film crackles with technical and narrative ingenuity, exploring the fragile state of the schizophrenic mind with micro-budget genre trappings.

Wyatt (MacLeod Andrews) shows up in New York City, at the doorstep of old friend Christian (Evan Dumouchel). The pair once close, haven't kept in touch for years. Wyatt was working as a handyman in the country at a nunnery, Evan at a hip marketing firm, attempting to "dominate": to keep a positive attitude, to turn himself from skinny loser to hunk. Both men have recently gone through breakups with their longtime girlfriends. Neither are prepared to be with the other, but their friendship is absolutely what they need right now. Only Christian's got a date tonight with Mara (Margaret Drake), a young hotshot at the company, who he's been building up to ask out for months. The boys meet up with Mara, only to find that her friend has slipped on the icy sidewalk. The night is spent in the emergency room, leaving the trio exhausted, though now bounded to each other, if in a strange way.

Strung out from his time in the country, but wary of the city, Wyatt edges around the fact he needs help, a place to stay, though he probably should be on the move. Christian won't have it, and makes sure his old pal stays with him. That's when the phone calls begin in the middle of the night. Wyatt must prepare for the coming war. They look like people, but are not. Christian is still human the man on the phone tells Wyatt, but he cannot be saved. He will be infected. The next morning Wyatt begins to stockpile his arsenal in the basement: Axes, knives, sulfuric acid, a high-powered nail gun.

The live-wire of paranoia runs taught in They Look Like People, isolating the audience in the ever-shifting mindscape of Wyatt. The results are often unsettling and then downright terrifying. One moment he holds the nail gun in his mouth. The next he is on the roof, aiming it at passersby. But the film's core is not only found in this darkness. It's the little touches found in Wyatt and Christian's friendship that makes the film feel alive. Whether that's the boys arguing over the rules of a sock war, singing an old song out of pitch, or Wyatt shaving Christian's back hair at the last minute for his date (yes it goes down that far). The chemistry between Andrews and Dumouchel is the glue, their performances rich and playful in nuance. Both are brimming with self-doubt, old wounds, new confidence. That masculine insecurity, that fear of being less than is a thing men often hide away for the very reasons it propels.

They Look Like People explores such bruised and battered places deftly and tenderly, honoring the pain, never treating Wyatt as a crazy person, and accepting something greater in friendship. Which all comes to a head by the heart pounding finale.

The other marvel to take into account is that Blackshear's debut is DIY filmmaking at its very best. Outside of post work (and even then its mostly Blackshear), the cast and crew mainly consists of the director and his three leads, with Andrews and Dumouchel also credited as co-producers. Blackshear's filmmaking may be rough around the edges by comparison to productions with money, but that works in favor of the nightmare landscape that slowly begins to creep into frame. After all, it's what's authentic on screen that counts, and what's here is vibrant, on par with micro-budget, genre-inflected wonders like Primer, Resolution and The Battery, films which also intelligently explore the world of male friendship.

With such a strong bond between director and actors, alike, They Look Like People endures like few indies can. Its charms and terrors are weighed in human measure, offering something enriching and deeply felt. It also marks the arrival of promising new talent in Blackshear and his little punkish DIY band of creators. Give these guys 100k and watch them make a million dollar movie.

This review originally appeared in a slightly different format during the 2015 Slamdance Film Festival in January 2015. They Look Like People opens theatrically in Los Angles Friday, February 26th at Arena Cinema, and will be released on Cable VOD and digital platforms on March 11th.