Review: ANGEL OF NANJING, A Portrait Of Urban Loneliness 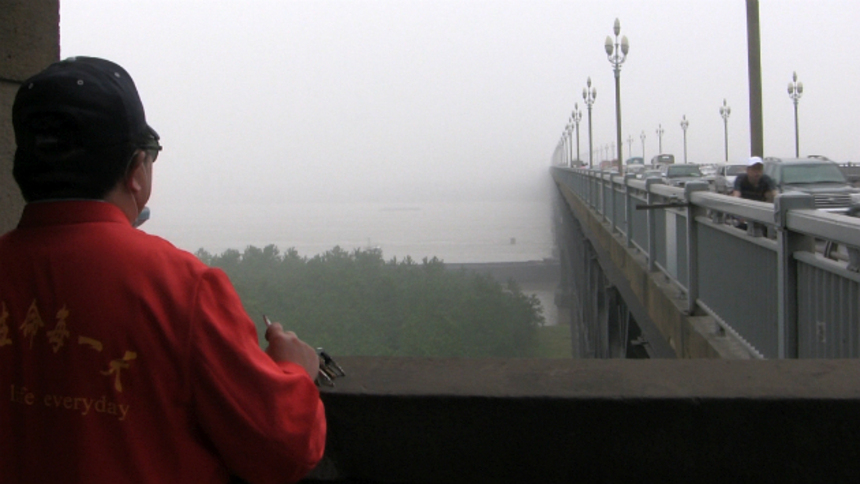 Like Japan's Aokigahara (aka "Forest of Death,") and San Francisco's Golden Gate, Nanjing's Yangtze River Bridge is famous for being the site of a disproportionate number of suicides each year. Chen Si is a man who has taken it upon himself to spend his weekends doing everything in his power to prevent as many suicides as possible, and he finds himself the subject and titular savior of Angel of Nanjing. Filmmakers Jordan Horowitz and Frank Ferendo recognized the intriguing potential in Chen Si's story, and the resulting film is a respectfully observant, quietly moving documentary.

The film follows Chen Si through his typical weekend routine, leaving his wife and daughter in their humble apartment to patrol the bridge on his scooter, clad in a seemingly custom-made red jacket that reads "Cherish Life Everyday" in English, beneath Mandarin characters. Chen has a knack, one he's honed in the ten-plus years he's volunteered on the bridge, for spotting people in distress -- possible jumpers. He ferrets out these troubled people, and then proceeds to pressure them (with a persistence that veers between charming and irritating) into sharing a meal with him at a nearby restaurant. If he hasn't been able to change their mind after that, he says, they're free to jump unimpeded. Happily, he's thwarted most if not all of the potential suicides he's encountered -- a number now totaling over 300.

Chen Si describes himself as a lover of people, who is fascinated by psychology, but he has no formal training and works during the week in logistics. The few talk-downs we see show Chen as a pushy, jolly, uncle-like figure who brusquely snaps people out of their emotional malaise with folksy truisms and delicious food. Also, though, he seems to be able to relate on a harder-to-define personal level; he admits to feeling depression himself, and uses his blog as an outlet when no one else will listen. He also conducts himself with an air of confidence (in his methods, in life's inherent value, in humanity) and compassion that has endeared him to local news authorities, benevolent societies, and of course those he's saved.

Angel of Nanjing's location (Nanjing generally, but the bridge itself looms large in the film) provides an appropriately somber setting, cloaked in grey smog/fog, and clogged with people passing past one another inconsequentially. The score is tastefully moving without striking the wrong tone, and the photography is graceful -- free of amateurish documentary cliches which could have undermined the story and message.

For their parts, directors Horowitz and Ferendo film Chen's affairs with an unobtrusive eye, blending their original footage with news stories about Chen himself, and the myriad suicides that have been successful in recent years. The deaths which occurred during the week, when Chen was attending his regular job, clearly eat away at the man. Now, after having opened up a makeshift care center and employing a small handful of fellow volunteers, Chen wants to spread the word and ignite a similar movement amongst others. If the film doesn't succeed in kick-starting grassroots human empathy groups around the world, it won't be any less effective as a modestly situated but universally proportioned portrait of urban loneliness.

Angel of Nanjing is available now on VOD.

Do you feel this content is inappropriate or infringes upon your rights? Click here to report it, or see our DMCA policy.
angel of nanjingchen siDocumentaryFrank FerendoJordan Horowitzyangtze bridgeDrama