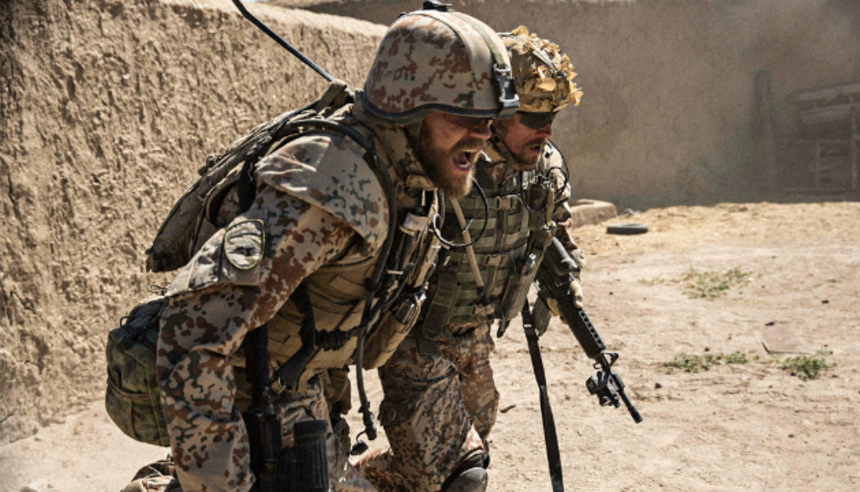 Battles are never won; at best, they are only survived.

In each of his first three films, writer/director Tobias Lindholm has tackled familiar subjects; each film has also featured Pilou Asbaek in the lead role. Lindholm collaborated with Michael Noer to explore prison life in R (2010), set sail to tackle terrorism at sea in A Hijacking (2012), and now has gone to battle in A War (originally titled Krigen), which has earned an Academy Award nomination for best foreign language film.

A Hijacking was told in a terse, understated, near-documentary manner, and Lindholm takes the same approach in A War, though its initial wartime setting in Afghanistan immediately infuses the atmosphere with tension. That proves to be well-founded tension; before the soldiers in a Danish military unit can even be distinguished from one another, a mine is tripped. Its victim is blown apart and dies before medical help can arrive.

The comrades of the unfortunate soldier return to their camp, shaken at the sudden loss of their friend. In that moment, the identity and nationality of the victim and the politics of the situation is irrelevant; what matters is the loss and the reminder that all the soldiers are at risk of sudden death.

To drive that point home, the film cuts to Denmark, where a mother, Maria (Tuva Notovny), is pushed to her limit raising three children on her own. In time, we learn that Maria is married to Claus Pedersen (Pilou Pilou Asbæk), the commander of the military unit on duty in Afghanistan. Maria may not be facing life and death situations -- though you never know with young children -- but clearly she is shouldering a very heavy load of responsibility. For his part, Claus may feel a fatherly responsibility toward the men under his command, but he's a firm, decisive paternal figure, and his men appear to respect him completely. When the unit then comes under extended heavy fire, a member of his team is severely wounded and is in desperate need of medical assistance at a proper facility. Pushed to the edge, Claus must make a difficult decision that has very serious repercussions that echo far beyond the battlefield and will affect his family forever.

Although the emotions are often restrained, the drama plays out with ferocious force. Pulse rates naturally flare when soldiers come under fire, and director Lindholm understands that nothing melodramatic needs to be artificially added to stir up emotions.

The same applies to domestic situations; when the family's middle son acts up, Maria understands that he's reacting to his father being away, coupled with stress about the continuing uncertainty. How long will daddy be away? Will he even survive his work day?

As both writer and director, Lindholm has a great understanding of exactly what's needed on screen. He provides sufficient information when firefights break out, for example, so that it's clear where the soldiers are located and their spatial relationship to each other, and to the danger that is pressing in upon them. Again, the same applies in domestic situations; when arguments break out, the focus remains exactly where it needs to be in order to understand the issues at stake and who, precisely, is affected.

The cumulative effect of A War is, indeed, potent. Like the decision made by Claus, it keeps reverberating, and its impact grows stronger as time passes.

The film is now playing in select theaters in New York and Los Angeles. It expands across the U.S. beginning tomorrow, February 19, and will continue to roll out in the coming weeks.

More about A War