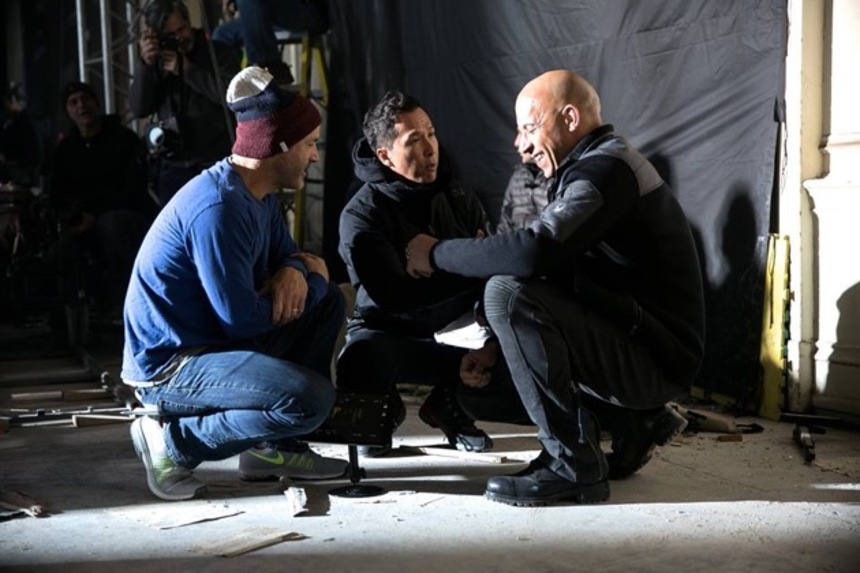 Vin Diesel posted the above photo a couple of hours ago on Facebook, welcoming Hong Kong action star Donnie Yen to the cast of XXX: The Return Of Xander Cage, the reboot of the other action franchise Diesel launched with director Rob Cohen.
An anonymous source close to the production also tells us that Yen has been hastily cast to replace Jet Li, who has chosen to exit the project for as-yet officially undisclosed reasons. Otherwise, however, the international cast of the film remains the same, with Tony Jaa, Deepika Padukone, Toni Collette, Samuel L. Jackson and a rumoured Ice Cube returning, for incoming director D.J. Caruso.
One of the great highlights of the Fast & Furious franchise has been its insanely diverse cast, and it is great to see XXX moving in the same direction. While fans will be disappointed not to see Jet Li and Donnie Yen in the same movie, there is now the very real chance of a Donnie Yen vs Tony Jaa throwdown.
We should also take a moment to give Yen some serious kudos, whose A-list status seems to be finally taking hold in the West, as it has belatedly done in the East.
Sign-In to Vote
Tweet 0 Submit

Do you feel this content is inappropriate or infringes upon your rights? Click here to report it, or see our DMCA policy.
Donnie YenJet liTony JaaVin DieselXXX: The Return of Xander Cage

I'm not surprised things didn't work out with Jet Li. That kind of film and role seemed to belong more in his early-2000s career anyway.
But isn't it a bit early to say if Donnie's becoming A-list in the US ? I'm indeed curious to see if he can break into the American mainstream as much as Jackie Chan and Jet Li did. I hope he does, but not too much.

Although it would have been good to have Jet Li in the movie, I am more than happy with his replacement. Always been more of a Donnie fan than a Li fan. Lets just hope that his role as the villain is better here than his part in Shanghai Knights.

Sounds like Donnie meant what he said about focusing on Hollywood at the moment. I hope he won't succumb into supporting role mediocrity doing this move.

Much as I adore Yen, it's unlikely that I'll see this. The first two certainly didn't appeal to me.

Why not a Donnie Yen and Vin Diesel throw-down?

Much like Chan, this isn't Yen's first attempt to break into the American market, and just like Chan, his first attempt (Highlander Whatever, Blade II and Shanghai Knights) didn't provide him any staying power. Chan did have one advantage: he was only in his 40's when Rumble In The Bronx gave him his second chance in the U.S. Yen's in his early 50's, but thankfully he still looks like he's about 30, and he still has the agility and fitness to handle large-scale action pictures. Still, it's kind of a shame his shot at a second chance has to come in such a dismal franchise. :(

This is a huge trade up. Jet Li has been blah on-screen for years.

Strangely he seemed to stop caring right at the moment when he was blossoming into a fine dramatic actor (with Unleashed, Fearless, Warlords and Ocean Heaven). A bit frustrating actually.

It will be interesting to see Donnie Yen as the bad guy in this movie. To my knowledge, he has only allowed himself to really "lose" a fight on-screen once: against Jet Li in Once Upon a Time in China II. All his other villain roles had a cop-out/plot-related reason for why he didn't ultimately succeed.