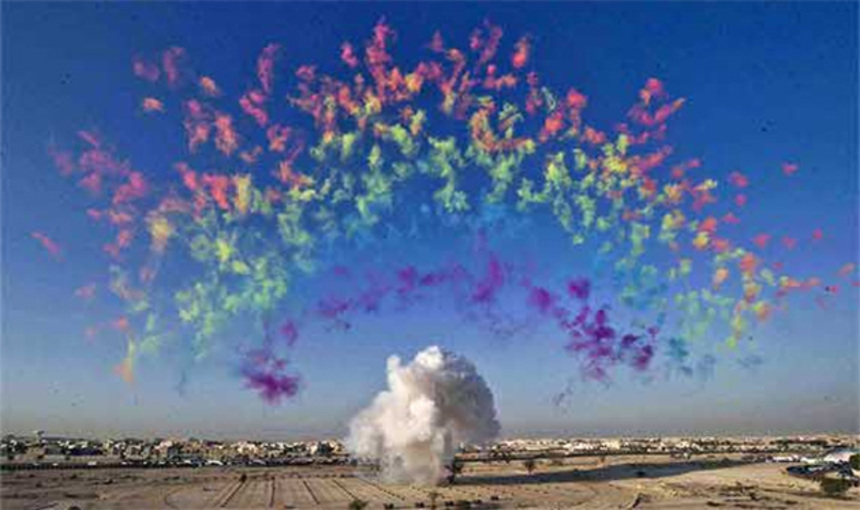 Ever since I was a kid I was enthralled with fireworks. There's something completely primal about seeing fire at the best of times, but the kinetic, colourful explosions of a firework show tickles me on a deep and fundamental level.

Artist Cai Guo-Qiang comes by this love even more resolutely, having grown up in the Chinese province which has been home to pyrotechnic construction for generations. He has used these controlled blasts to feed his art, both in the skies above and on the canvas. Fire is is his tool, colour his weapon, all contributing to a unique and compelling vision.

Kevin MacDonald has shown a deft touch throughout his career, from his raucous take on Marley, his epic Enter the Void to his celebrated feature film The Last King of Scotland. With Sky Ladder: The Art of Cai Guo-Qiang his experience comes to the fore, constructing a film that packs into a feature length running time an impactful and engaging look at this fine subject.

What set's MacDonald's film apart is that it's paradoxically concise and in-depth. Running a breezy 76 minutes, the film never feels rushed or draggy. Too often films lose themselves trying to reach an arbitrary size, cut down for broadcast or bloated for theatrical run time. Here, the filmmaker tells the story for as long as is required to do so, and it's a welcome and refreshing thing to behold.

Guo-Qiang's art itself is equally engaging, with audiences catching glimpses of his installations and explosive presentations. Tracing his journey from China to Japan to New York City, the film also touches on numerous social and political issues that have shaped his work, from the cultural revolution clashes in China to a cancelled construction of the Sky Bridge due to post-9/11 concerns.

The photography captures the images in stunning clarity, using everything from aerial shots to what appears to be surveillance footage to show the various ways that his works are accomplished. It's the large scale outdoor pieces that truly enthrall, mixing modern technology with the keen eye of a visual stylist. Right through to the grand reveal, captured with a dizzying helicopter shot, we're treated to some of the finest eye candy.

The nature of contemporary, large-scale art is discussed, coming to terms with the challenge of being new and extraordinary when your canvas demands the cooperation of political and administrative officials. The artist and those surrounding him are refreshingly introspective, providing real insight into these challenges and coming to terms with the ambivalent draws of spectacle versus the draw for aesthetic originality.

As a primer on Cai Guo-Qiang's art the film is exemplary, as a deeper delve into the ideas and ramifications of what he accomplishes it becomes even more impressive film. What first might appear as a mere sketch, full of flourishes and elements of beauty, includes within it aspects of real philosophical depth. Like Guo-Qiang's art the work of MacDonald may be overlooked as something more than just spectacle, and when one looks a little deeper you find something quite extraordinary, informative and moving indeed.

Do you feel this content is inappropriate or infringes upon your rights? Click here to report it, or see our DMCA policy.
Cai Guo-QiangDocumentaryfireworkssky ladderSundanceKevin MacdonaldIan BurumaGuo-Qiang CaiWen-You CaiWenhao Cai