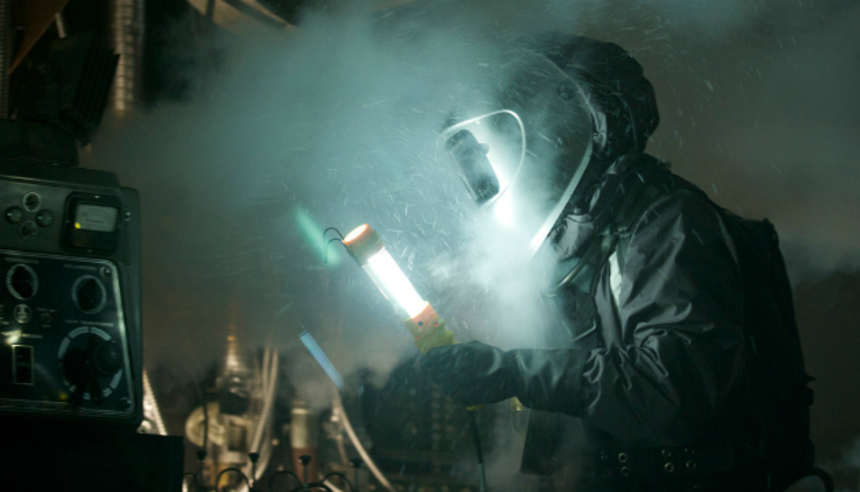 I never thought it would happen, but I have finally, personally, hit the wall with indie time travel flicks. Jacob Gentry's Synchronicity is not lacking in smarts or clockwork precision, but abjectly fails to convince in its core ideas of love and fate.
Love may be a sticky and difficult thing, but the film seems to only communicate lust and desire, while empathy fails to make the journey. There is one worm hole too many. This leaves some impressive homages to Blade Runner's dreamy Vangelis score and neo-noir chiaroscuro, as well as Code 46's delight in contemporary-future architecture, simply hanging in empty space.
Slightly strung out scientist Jim Beale (Chad McKnight, often evoking Jared Leto) is on the verge of inventing time travel with the help of his two calmer, wise-cracking lab technicians, Chuck (AJ Bowen) and Matt (Scott Poythress). But here is his paradox: He only has enough funding and radioactive material provided from billionaire angel investor Klaus Meisner (Micheal Ironside, deliciously vile) to open one side of the space/time wormhole. How to prove that something by necessity, requires two ends, when you only have one?
Don't sweat it, though, it works as certainly as Werner Heisenberg was of his famous principle or that Nicola Tesla knew he would die broke and alone feeding pigeons. In short, Synchronicity struggles with understanding the difference between a hypothesis and a theory.
Of course, nature abhors an empty wormhole and someone comes back through the other side. The human figure is obscured in the predictable kind of way of this type of film; with so few characters, elimination can get ridiculously easy. Could it be the femme fatale, Abby (Brianne Davis) who collects serial-numbered dahlias? Or Ben himself coming to warn of the dangers of flirting with gorgeous solitary ladies found in parking garages? No matter, the film quickly starts to draw ever tightening circles around Ben and Abby's relationship to one another, all the while Klaus threatens to steal the invention by withholding raw materials, and Matt and Chuck have to do all the heavy lifting. There is nothing wrong with this, some of the humour is quite excellent in fact, but just nothing is terribly fresh about its execution here. Shots from Aronofsky's The Fountain are lifted without any resonance to the story, as is all the Blade Runner stuff.
Gentry does have a nice time machine design -- possibly built out of old power supply units and industrial sized speaker magnets? -- and certainly lays out the pieces of the film in a manner that makes sense to any attentive viewer as the the narrative structure becomes apparent. But his world drowns in empty homage, and even more colossally empty city landscapes. This is not a post apocalyptic urban landscape, but supposedly a thriving metropolis, and the lack of denizens makes the film feel too insular to suspend disbelief.
What was arguably started slightly over a decade ago with Shane Carruth's Primer, albeit one might go a bit further back to 2001's cult hit Donnie Darko, was a clever way to express social commentary (on venture start-ups, trust and ego) through technically challenging science fiction on a shoestring budget. Time travel as a device in movies is certainly nothing new; one can go all the way back to the 1960s with George Pal's Oscar winning adaptation of H.G. Wells The Time Machine or Chris Marker's wonderfully avant-garde La Jetee or the 1980s cycle of Back To The Future, The Terminator and Bill & Ted's Excellent Adventure films to see quite the diversity.
And Primer certainly inspired a lot of ideas-over-dollars time travelling after its Sundance prize and cult success.  Recent examples include, but are far from limited to, Coherence, Time Lapse, Predestination, 11AM and The Man From Earth, all of which met varying degrees of success for executing their ideas and standing out in an increasingly crowded indie field, in a way that, unfortunately, Synchonicity falls short.
There is a curious thing about the film, very likely not intended by those involved. As Jim tries to link both ends of the worm hole paradox and win the girl, his moral axis spins off-centre. The love story, then, is slowly warped into a kind of douche-bag manipulation that is the opposite of, say, Groundhog Day or even Eternal Sunshine of the Spotless Mind. Who wants to see asshole Bill Murray or an emotionally cynical Kate Winslet at the end of either of those films? If Jim being kind of a incorrigible prick as reverse karmic enlightenment was intended, then, at least from my perspective, it is an interestingly bad idea. If not intended, then that is botched craft of the highest order; a love story without chemistry is a sadly wilted flower.
If you have endured all these references to other, better, films and are a bit exhausted by all of them mentioned here, well then congratulations, you have kinda, sorta, had my experience of Synchronicity.
Review originally published during Fantasia in August 2015. The film opens in select theatres and on various Video On Demand platforms, including Amazon Video and iTunes, on Friday, January 22, via Magnet Releasing.
Tweet Post Submit

Do you feel this content is inappropriate or infringes upon your rights? Click here to report it, or see our DMCA policy.
jacob gentrymichael ironsidetime travel