While we all wait patiently (or maybe not) for The Raid 3, director Gareth Evans has not been idle. Indeed, after not having picked up a camera for a while, he decided to make a short when his colleagues Cecep Arif Rahman, Yayan Ruhian and Hannah Al Rashid were visiting him in his native Wales.

In a time of civil war, a young warrior is given the task of delivering a treaty between two rival lords. During her journey through the woods however, she finds herself hunted by two assassins intent on intercepting her message of peace in a bid to maintain the fear, instability and violent rule of their leader.

According to Evans in a post on Quiet Earth, the short was made in part to test out some choreography, and also in part so he could see if he could make action that was more kid-friendly than in his previous films (the image below is from Evans' twitter feed).

Yes, it's kid-friendly, but don't let that dissuade you. This is some pretty awesome work, both from the actors and from Evans. It's shot in beautiful black-and-white, it's elegant and moves like a perfectly orchestrated piece. Gareth, can you make this your next feature please?

UPDATE: Embedding has been disabled, but you can watch the video on youtube. 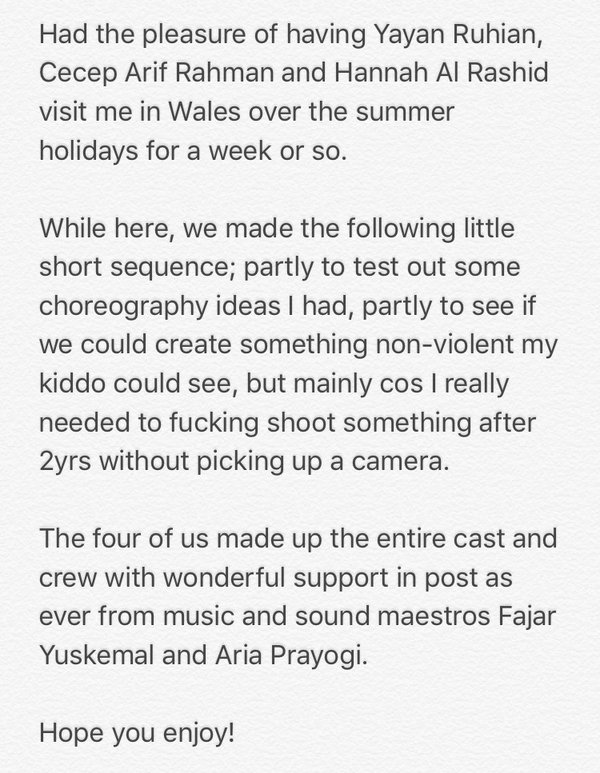 Do you feel this content is inappropriate or infringes upon your rights? Click here to report it, or see our DMCA policy.
Cecep Arif RahmanGareth EvansHannah Al RashidYayan Ruhian