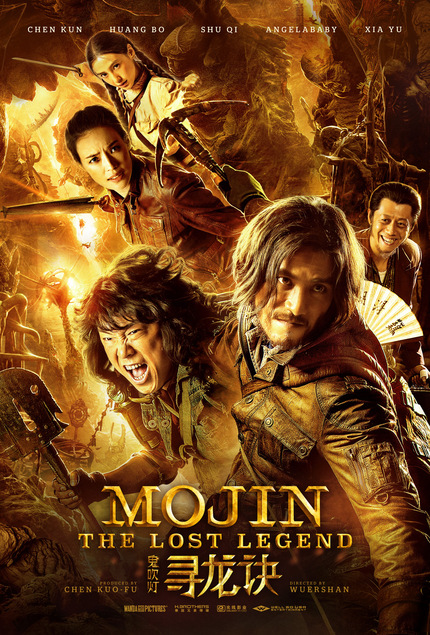 Releasing in North American theaters this weekend is Mojin: The Lost Legend, the latest film from Wuershan, director of Painted Skin: The Resurrection.
While the Painted Skin sequel was a bit overwrought and tragic for its own good, it looked pretty great on screen. This time around, Wuershan seems to have kept that visual magic and added a bit of levity to this action comedy adventure film starring Shu Qi, Angelababy, and Huang Bo.

Some people have a special gift. They're able to travel between the realms of the Living and the Dead...and Tomb Raiding can mean Big Business.

Welcome to the world of the Mojin.

Based on the #1 Bestselling series of novels and starring Shu Qi, Chen Kun, Angelababy, and Huang Bo, MOJIN: THE LOST LEGEND pits a trio of legendary grave robbers against scholars, rivals, and the law -- until an offer from a mysterious stranger tempts them into one last heist... an adventure that will test their skills, their friendship, and ultimately -- their mortal souls.

In this clip, we get a quick glimpse of the tomb raiders in action against some undead mystical foes with plenty of wire fu and fun dialogue to go along with it. I'm a sucker for far eastern action comedies, so this one looks right up my alley!

Mojin: The Lost Legend raids US theaters this Friday, December 18. Check the link below for listings.
Tweet Post Submit

Do you feel this content is inappropriate or infringes upon your rights? Click here to report it, or see our DMCA policy.
WuershanAngelababyKun ChenKeith ColleaAlex EckstormActionHorrorThriller