Destroy All Monsters: DOCTOR WHO Is A Hell Of A Bird 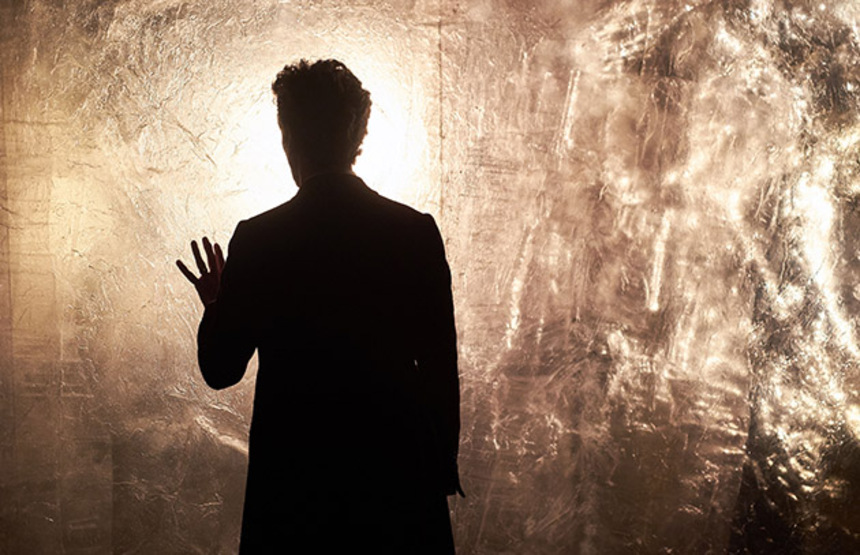 Spoilers for series 9 of Doctor Who.

Tension has been building between stories and truth throughout Steven Moffat's tenure as showrunner on Doctor Who. A nod here, a theme there; I've previously confessed my fondness for the Eleventh Doctor story "The Rings of Akhaten," which saw its climax revolve around a creature that feeds on memories and stories, which is just one example.

This undercurrent has only gained speed as the Twelfth Doctor (Peter Capaldi) has begun interacting with supposedly "imaginary" characters - Santa Claus last Christmas, and before that, Robin Hood. These instances can't help but close the implied metatextual loop: an imagined character (the Doctor) holding forth on the importance/lack of same of another imagined character inevitably delves into why we invent such characters in the first place, and therefore, what place the Doctor holds in that pantheon of ideas.

This throughline has, of course, had me thinking about my own relationship with stories, and drilling down on why some stories lodge themselves deep in my head while others just pass by. And as if to answer its own question, Doctor Who, this past weekend, offered up what might be the definitive example of what I think these stories are for.

The episode is called "Heaven Sent," written by Moffat and directed by Rachel Talalay, and it's the second of a three-part finale to the season. In the previous installment, the Doctor's companion, Clara Oswald, was killed. This was a big deal, and the Doctor is wounded and grieving - and to make matters worse, he's been horse-traded to an unknown adversary, and teleported to an isolated castle on an alien world.

"Heaven Sent," then, is a one-man show. The Doctor is alone, and the thrust of the episode is built around his figuring out what he's doing in that castle, and how to get out.

He quickly works out that the castle is not a prison, but rather, an interrogation device by way of torture chamber. The only other creature in the castle is a monster called the Veil, which slowly advances toward the Doctor and will kill him if it touches him, unless he confesses something to the creature that is absolutely true and which he has never revealed to anyone else.

As such, he can delay the Veil indefinitely by running away from it, but sooner or later finds himself in various scrapes or dead ends which require him to admit something to save himself. Doing so also changes the configuration of the castle, which is often the only way in which the Doctor can proceed: and thus, his offscreen captors slowly accrete the Doctor's deepest secrets.

But I have described this castle as a torture chamber. The Doctor, again, arrives at the castle fresh from witnessing the death of his best friend. A portrait of Clara hangs in one of the castle's chambers. The pain is fresh. The Veil is a manifestation of a nightmarish memory from the Doctor's childhood. The fear is personal. It's a "bespoke hell," as the Doctor describes it; a custom-designed puzzle box with no purpose other than to prise the Doctor's secrets from his lips or drive him mad, or both.

And here's the real rub: after discovering that the only way out of the castle is on the other side of a twenty-foot-thick diamond wall, the Doctor intentionally creates a time loop whereby he will die an excruciating death, reset to the beginning of his adventure in the castle, go through everything again, remember his pain from the previous loops, and die again - all so that he can take a few more swings at breaking through that diamond wall.

Why? Because, he figures, if he endures this torment long enough, and loops around long enough - say, for a couple of billion years - eventually he will break through the wall, and get out. It's an extraordinary piece of writing, formally dazzling, and retrospectively illuminating once the twist has been revealed.

I have two thoughts.

The first is that the episode lands a fairly spectacular beat with respect to the tension between stories and truth that I mentioned earlier.

The purpose of the castle / torture chamber is to drag truth out of the Doctor. The only way to stop the Veil in its tracks is to admit something true: a fact. This is what the Doctor does, on three occasions, throughout the episode when he has no choice but to do so in order to advance himself through the puzzle.

When the Doctor has solved the puzzle, however, and the Veil advances on him as he is bashing away at the diamond wall with his fist, he no longer surrenders truth. He tells a story. He begins telling the Brothers Grimm fable regarding the definition of eternity. He is interrupted, and mortally wounded, after just a few lines.

But as he iterates through the time loop endlessly for the next couple of billion years, the Doctor keeps telling the Veil that story, and because he is working his way through the diamond wall while doing so, he manages to tell a bit more of it every time. The story is the thread that is pulling the Doctor through two billion years of his own tailor-made hell - and in one of the most triumphant moments the series has ever put onscreen, when the Doctor finally gets to finish that story, he busts clean through the last of the wall.

My second thought is this: the reason I think we need stories like this, along with every other one from Macbeth to Mad Max: Fury Road, is how they furnish us with articulation frames by which we can understand the unorganized truths that make up our daily reality.

"Heaven Sent" hit particularly nicely, for me, because among other things, the Doctor's puzzle box castle is a rather unerringly on-model metaphor for a mood disorder and the thought processes therein, none of which any of us are (hopefully) trapped in for two billion years, but can certainly feel that way at the time.

The great tragedy of the castle, after all, isn't that the Doctor is stuck there for so long; it's that he's stuck there for so long with his grief, and that he can do nothing about it: that part and parcel of his strategy to escape from the castle at all is the requirement that he confront those feelings again and and again and again ad infinitum, each time as fresh as the time before; and in the meantime, hope against hope that his tiny, futile-seeming, incremental progress on the diamond wall will, someday in the unseeably distant future, let him escape from the prison of his mind.

The castle reorganizes itself every time the Doctor offers up a truth to the Veil, and similarly, my mind reorganized itself once "Heaven Sent" offered up this truth to me. It's a small insight, perhaps, but models by which we can understand the things that are happening to us and the people around us are the difference between empathy and the lack of same. This episode was like a magic trick, except it also showed us how the magic worked; and became all the more magical for it.

Do you feel this content is inappropriate or infringes upon your rights? Click here to report it, or see our DMCA policy.
Doctor WhoPeter CapaldiSteven MoffatTwelfth Doctor

More about Doctor Who: Series Nine