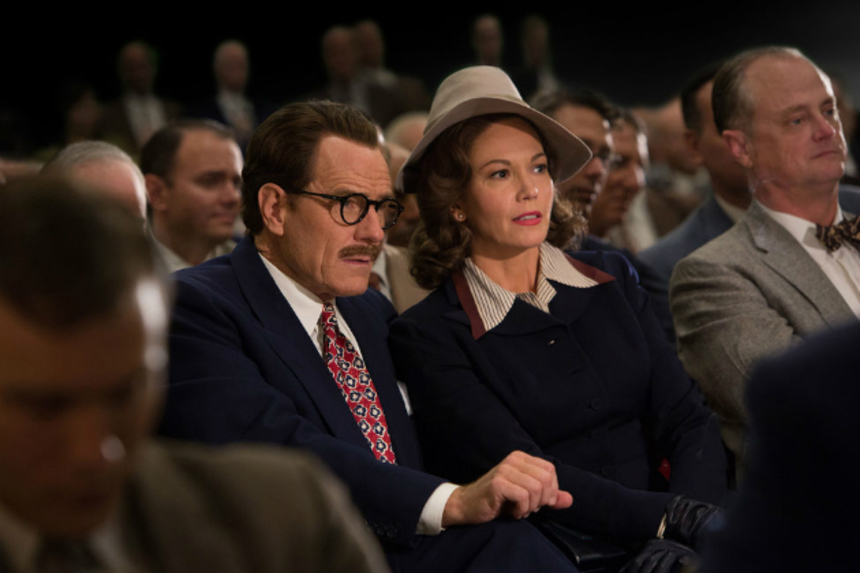 For people who pound away at keyboards for a living, Trumbo is inherently nostalgic, presenting a romantic vision of a life enjoyed by only a few.

Slumped in a bathtub to ease his back pains, Dalton Trumbo slaves away, staring intently at the latest draft of a screenplay propped up on a board, allowing him to access scissors and tape and/or glue so he can cut and reassemble the best version possible. When his back pains allow, he sits up in a hard-backed chair and attacks his typewriter with furious energy, cigarettes and alcohol at the ready to aid the creative process.

As the movie bearing his name begins, Trumbo (Bryan Cranston) has reached the top of his profession. He is widely respected in the film industry for the quality and commercialism of his scripts. He is reaping the financial benefits, and enjoys living on a beautiful ranch with his beautiful wife (Diane Lane) and their three beautiful children.

Ah, but that is not enough for Mr. Trumbo. No, he insists on being an individual, and he is a member of the Communist Party in good standing. He is guided by his own ideals, and he feels comfortable with the principles of the Communist Party. He is not the only one in Hollywood to have done so -- for years, in some cases -- but as the Cold War begins in the post World War II era, the Soviet Union has fallen into disfavor in the U.S. and in 1947, the congressional House Unamerican Activities Committee (HUAC) turned its biased eye on Hollywood.

Trumbo tells the story of the resulting blacklist through the eyes of Trumbo and his family. It's certainly not an all-encompassing view of the blacklist and its devastating effect upon the many people affected -- that would require a miniseries, at minimum -- but it feels like a good-faith attempt to give a deep sense of what happened to a prominent member of the so-called "Hollywood Ten," i.e., the writers sentenced to prison for refusing to cooperate and name names. In one sense, writers had it easier than actors or directors because they could keep working by hiding behind pseudonyms. That doesn't mean life was a breeze, though, and Trumbo amply demonstrates the challenges Trumbo faced after he was released from prison and struggled to provide for his family by churning out scripts at a far-reduced price. Creating worlds and characters by stringing words together is not for the faint of heart nor for those lacking in imagination, and can sap the soul without relief.

Beautifully mounted by production designer Mark Ricker and set decorator Cindy Carr, beautifully dressed by costume designer Daniel Orlandi, and beautifully shot by cinematographer Jim Denault, Trumbo is directed by Jay Roach in fine journeyman fashion, not calling attention to itself but intent on serving the material well. John McNamara's screenplay, based on Bruce Cook's book Dalton Trumbo, is episodic, which is a given considering the passage of time, yet it still feels of a whole, even though it's very selective about which episodes it chooses to relate and which characters are featured.

Cranston is swell in the lead role, giving heart and humanity to Trumbo, while Lane lends grace to the thankless role of the dutiful wife. Elle Fanning stands out as their daughter Nikki, who is clearly her father's child. John Goodman brings great life to low-budget movie producer Frank King, while Michael Stuhlbarg inhabits Edward G. Robinson with tremendous pathos. Louis C.K. and Alan Tudyk add strong voices as Hollywood screenwriters. Helen Mirren as a gossip columnist is the juiciest "villain."

As a writer of long-standing, I know my place in the pecking order, and I hold creative souls such as Dalton Trumbo in high esteem. So, yes, I have written about a movie that celebrates and honors him with less objectivity than usual. Still, I believe that Trumbo is a treasure deserving of praise.

The film is now playing in select cities across the U.S. via Bleecker Street. It will open in theaters nationwide later this month.