Blu-ray Review: SOME KIND OF HATE Puts A Novel Twist On Slashers 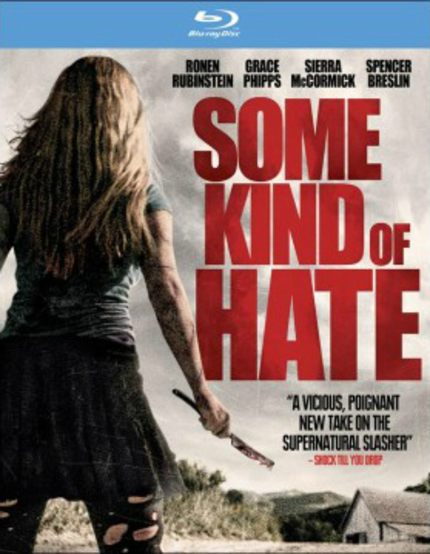 With a healthy festival run that included appearances at the Stanley Film Festival, Fantasia, and FrightFest, along with a limited theatrical run in September, Adam Egypt Mortimer's debut feature Some Kind of Hate has a lot to be proud of. Now, with a slew of positive reviews to buoy it, the film makes its exclusive Blu-ray debut at Best Buy this week and we've had the opportunity to preview the disc.
Some Kind of Hate is the story of Lincoln Taggert, an impossibly handsome teenager of the brooding variety who is inexplicably the victim of years of abuse from a preppy bully. When Lincoln fights back after being pummeled in the hallways at school, he's expelled and sent to a sort of boot camp for youth offenders to atone for his sins. This sets up the film's main thematic push, that Lincoln is a put-upon victim of an unjust society.
Rather than have him jailed, the judge puts him into this program designed to rehabilitate. The problem is that this program, which puts itself out there as a therapeutic community, is just a more concentrated version of the world outside that has treated Lincoln so poorly. With his nerves shredded, and his coping mechanisms failing, in steps the ghostly Moira, a spirit with a mean streak a mile wide, to help him neutralize the threats around him.
Moira, the ghost of a former camper, proceeds to take out anyone who messes with Lincoln in a very grisly fashion. Unfortunately for Lincoln, this does nothing to lower his profile, and he gains a reputation as a dangerous man, the kind of reputation that only serves to increase his profile and make the target on his back bigger. When Lincoln wants out, Moira is not quite ready to call it quits, and a battle of wills begins.

Of course, for any fan of horror films, the idea of a supernatural woman (or girl, in this case) as the slasher in one of these films is somewhat novel. That's not to say that it's never been done, it has been done several times, before, but most of those transgressions against slasher norms happened in the genre's '80s heyday.
What Some Kind of Hate does is to flip the gender roles of the protagonist from the stereotypical virginal "final girl" to a somewhat meek emo teenage boy in Lincoln. This concept, as well as the tenuous symbiotic relationship between Moira and Lincoln, are certainly interesting concepts, though I do have some issues with the film and its execution.

Moira was a tortured teen. Before her death she was teased mercilessly and, as is frequently the wont of emotionally unstable adolescent girls, she turned to self-mutilation or "cutting" as a means of diverting her emotional distress. All of this rings true; however, what is difficult to place is where exactly our sympathies are supposed to lay.

When Moira begins acting on Lincoln's behalf, it appears that she is something of a godsend, dispatching justice in a way that is too gruesome for Lincoln to manifest on his own. However, when she starts to ramp up her acting out, she quickly becomes a shrill, vindictive beast that no longer engenders any sympathy, yet somehow she's simultaneously mopey to the point of irritation, kind of like a psychotic Moaning Myrtle of Harry Potter fame. When the Moira character makes her turn toward the "heel," I lost interest in her and that seems to be where her backstory backfires.

Perhaps the closest analogy to Moira's character in Some Kind of Hate is the character of Jason Voorhees in Friday the 13th. Both were tortured children who lost their lives either directly or indirectly because of bullying. However, Jason manages to bring slightly more pathos to the character through his silence than Moira does through her ranting.
Sure, both are clearly out of their gourds with rage, but Jason's silent seething goes a long way toward making him a character who doesn't grate on our nerves while Moira insistent screeching makes me want her to disappear. It's the film's one great flaw for me, and it's something that I can't help thinking of when I try to suss out my feelings. All that being said, it is a solid debut and an interesting concept from director Mortimer and I can't wait to see what he does next.

Some Kind of Hate comes to Blu-ray exclusively at Best Buy for a few weeks and this Blu-ray looks predictably fantastic. The film was shot digitally, as most films are these days, and the transfer looks quite good. The film also sounds good, even though it doesn't exactly test the surround capabilities with its DTS-HD MA 5.1 audio track. It could've been punchier.

In terms of extras, we're treated to a pair of commentary tracks and some deleted scenes. The first commentary is with the director, Adam Egypt Mortimer, and it focuses on the pre-production and development side of the film, featuring lots of anecdotes about story-related decisions.
The second is a cast commentary with lead actor Ronen Rubenstein and supporting performers Grace Phipps and Sierra McCormick (Moira). This is a much livelier affair, with the actors describing more of the actual production and appearing to enjoy themselves greatly, which is always fun to listen to.
The deleted scenes offer extra exposition, but as usual, nothing that should've been left it. At 83 minutes, Some Kind of Hate is just long enough for its genre and ambition, so leaving these scenes on the cutting room floor was the right call.

I'll give this one a modest recommendation. It's not going to set the world on fire, but it's probably something you haven't seen before, and that's usually enough for me.

Do you feel this content is inappropriate or infringes upon your rights? Click here to report it, or see our DMCA policy.
Adam Egypt MortimerBrian DeLeeuwSpencer BreslinSierra McCormickGrace PhippsAndrew BryniarskiHorror