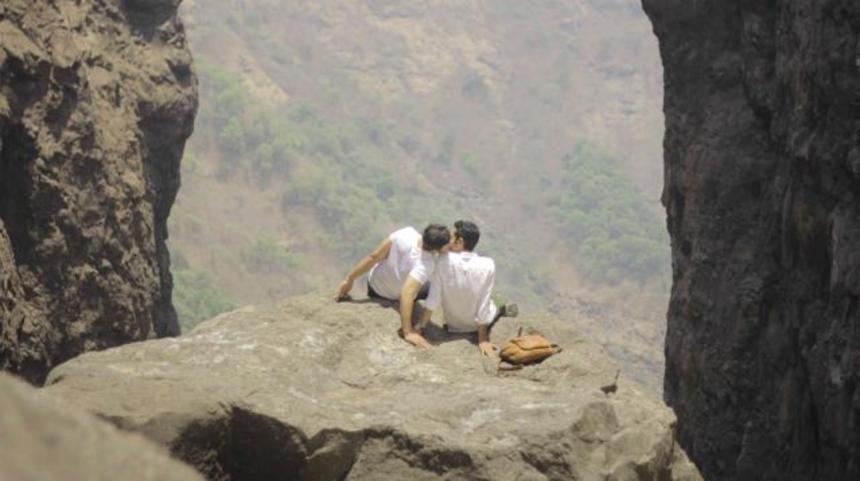 Same-sex activity is illegal in India, punishable by imprisonment. The release there of Deepa Mehta's film Fire, about a love affair between two women, incited violent protests in 1998. So the fact that Sudhanshu Saria's debut feature Loev was made at all is something of a miracle. (Indeed, the entire cast and crew worked in complete secrecy.)
Still, the film must be judged on its own merits; luckily, Loev is a strong debut, a film more influenced by American and European cinema, but nonetheless part of its originating culture, an open and intimate examination of love and sexuality that is dangerous not only politically, but personally.

Jai (Shiv Pandit), currently working in New York, has come home to Mumbai for a few days on business, but plans to meet with his old friend Sahil (Dhruv Ganesh), a musician. After an argument with his boyfriend, Sahil meets Jai at the airport, and the two go to the countryside for long walks and talks. But tensions surface as to Jai's romantic feelings for Sahil. Sahil's strange behaviour sparks a violent reaction from Jai, which might lead to a permanent rift.

Taking a cue from contemporary indie cinema, Saria frames Loev with little exposition, getting right to the story, allowing the dynamics of each relationship to unfold before the audience. The dialogue is kept more or less to the essential; not minimalistic in amount, but in information, reflecting the frequent habit of the characters, in their failure to express their needs and desires. The camera is still when focus must be contained, but moves with the tension and nervous energy of both Jai and Sahil, acting as a conduit for their emotions.

The build-up of this tension is slow but steady, and as Jai and Sahil return from the country and confront both Sahil's boyfriend and the reality of being gay in India, Saria turns the screws on both their outward and inward situation. Oddly, Sahil is the more open of the two, more confident in his sexual identity, and teasing Jai to the breaking point. In a telling scene, Jai, Sahil, Sahil's boyfriend Alex and Alex's latest boy-toy have dinner; whether Alex's openness about his sexuality is wish fulfillment on Saria's part, or that such openness is allowed in certain situations, in unknown, but the film moves from being just about Jai and Sahil as individuals and more about how to cope not only with hidden desires, but hidden lives.

Both main actors, Pandit and Ganesh, are tailor-made for the roles, not only from a physical standpoint -- the one time Ganesh wears a suit, as Sahil, is is visibly uncomfortable, and Pandit would look completely out of place with a guitar slung across his back -- but emotionally. Pandit perfectly times the slow release of his frustration, so that his terrible act of violence against Sahil is both appalling and believable.
Sadly, this was Ganesh's last role (he has since passed away), as he obviously had a promising career. While the film begins from Sahil's perspective, and the audience might at first align with him, Ganesh slowly reveals that Sahil is no saint, though undeserving of all the treatment he receives, and his perhaps willful ignoring of Jai's feelings in light of his behaviour reveal a callousness that belies our earlier sympathy.

A refreshing change from the usual cinema seen out of India, Loev examines the personal and the political, at times rightfully mingling the two, in a sensitive yet open portrait of love and sexuality. By Western standards, the film doesn't necessarily say or do anything new, but it is still a sweet film, and the the difficulties of love and intimacy, particularly if one's sexuality is deemed offensive, is still an issue in much of the world, and Loev explores this well.

Do you feel this content is inappropriate or infringes upon your rights? Click here to report it, or see our DMCA policy.
Black Nights 2015Dhruv GaneshIndiaLoevShiv PanditSudhanshu SariaSiddharth MenonDramaRomance