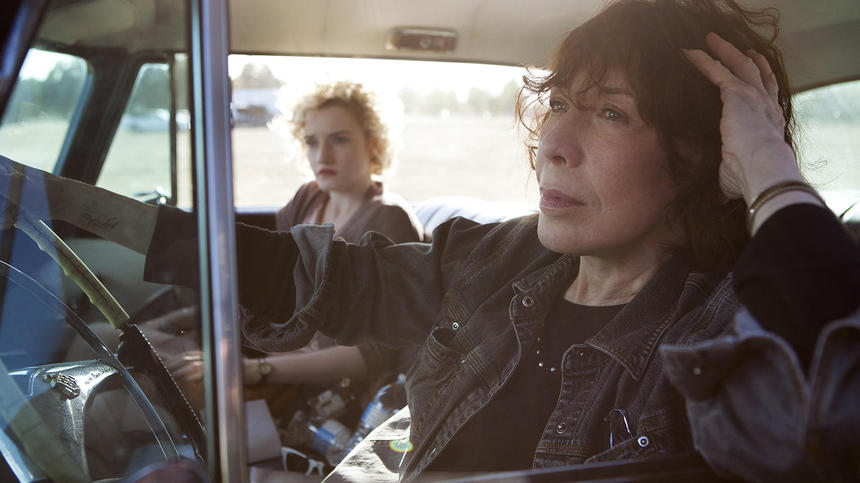 Lily Tomlin is having a renaissance, and we should all be thankful for that. A consummate performer and comedian, she has aged not only gracefully, but in strength as an actor. And her skills are on full display in Grandma. Paul Weitz, a producer, writer and director known for perhaps more mainstream work such as American Pie and Down to Earth, knocks it out of the ballpark with this Sundance-style comedy about family ties, grief, and love.

Elle (Tomlin) is an unemployed academic and poet, whose long-time partner Violet passed away several months before. Her granddaughter Sage (Julia Garner, We Are What We Are) shows up, needing Grandma's help: Sage is pregnant and has scheduled an abortion for that afternoon, but needs $600. Both Elle and Sage are tapped out, so Elle takes charge and they make the rounds of trying to find the cash.

This is a role tailor-made for Tomlin, which perhaps might take away from any surprises in the story, but this is a film about performances. Elle is smarter than most people, loud, brash, but fierce in her love and support of Sage's decision. As Elle and Sage keep hitting roadblocks in their quest for the money, Tomlin slowly peels back the layers to show how beneath that love, there is great pain and grief. She breaks up with her new girlfriend Olivia (Judy Greer) but hides the real reason; she alienates friends who know too well how acerbic she can be.

In the most telling scene, she reaches out to her ex-husband (Sam Elliot), whom she left without a word, in order to help Sage; she is finally willing to swallow her pride, but she still will not curtail herself even in the face of rejection. These two seasoned actors perform as if they've been doing this for years, which is a reflection of their character's age and life experience, but each still finds the raw anger and pain of their past, and lets their emotions loose. Tomlin's Elle remains strong, but is willing to face up to reality in order to do the right thing for Sage.

I can't imagine how intimidating it must have been to work alongside Tomlin, but Garner more than holds her own. Sage is young, and she's made mistakes, but she's not stupid; her decision to have an abortion will not be regretted, but she still feels it, and she is both proud of and embarrassed by Elle, as any teenager would be. Other performers such as Greer, Laverne Cox, Elizabeth Peña (in what I'm guessing was one of her last roles), and Marcia Gay Harden as Elle's daughter, make this a cut far above your average walking-and-talking film, as each character has a definite place of their own and a position in Elle's life that both confirms and exposes her own identity, still in the works even at her advanced age.

While Weitz's story does not necessarily offer the unexpected, its honesty in dealing with abortion as a right and a necessity is to be applauded (too rarely seen in American film). This is an intelligent script, with fantastic dialogue that feels as normal as any conversation and yet witty enough to keep the audience laughing and crying. Tomlin has never been better.