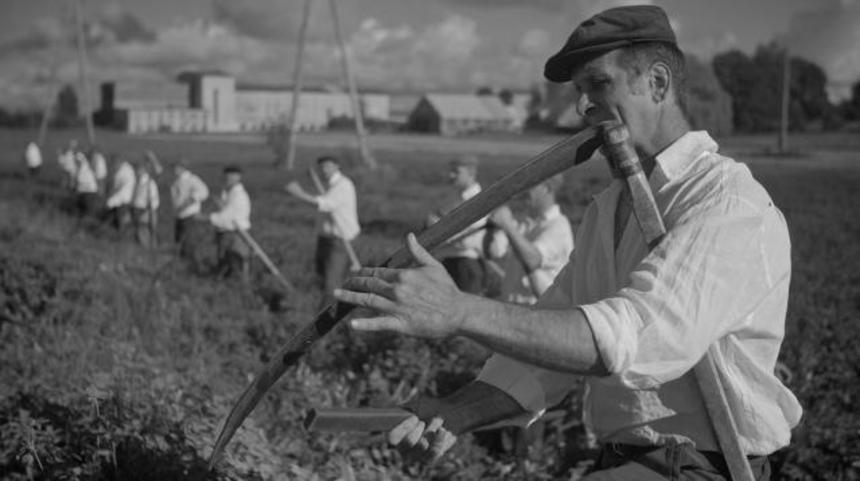 Tales of mythic figures, particularly those whose myth is perpetuated by governments, are ripe fodder for film. This can be especially interesting if someone like myself is ignorant of said mythic figure. Such is the case with Dawn, Laila Pakalnina's first fiction feature.
I'll be honest, I'm not sure I really understood what was going on for much of the film, but it was completely engrossing. Part Tarkovsky, part Haneke, with a more than a touch of Einsenstein thrown in, this black and white surreal fable is a fascinating look at the early Soviet era, a tale of children gone wild, the price of communism, and a community under the siege of hunger and madness.

Inspired by the tale of real life boy Pavlik Morozov who became a hero for the USSR, in Dawn, Janis, a young boy living in a small village, joins with his fellow villagers for the Soviet vision of the collective farm, which will bring a good life and plenty of food for all. His father, however, is against this, and the two sides -- as Janis sees them, the 'reds' or good people who want the farm, and the "whites" who do not -- battle it out. Janis turns on his father, and his family eventually turn on him with deadly results.

This is a satire if ever there was one, an absurd tale where the character fill the frame in an exaggerated state. This exaggeration is just strange enough to keep the audience out of a state of complacent viewing, yet real enough to feel strangely familiar. Janis and the other children are members of a group that is a blend of the Scouts and Hitler Youth; they know they are the future, and feel power beyond their years to gain favour with the Soviet authorities, even if it means denouncing those closet to them. They are observed by adults, who have their own arguments to settle. These adults drink, fight, laugh (mostly at each other), try to sleep and generally contribute to or ignore the chaos around them.

But while the story of Morozov serves as a template, the story is not so much about him or Janis, as it is this period in Soviet life. Pakalnina is both honouring and critiquing this particular form of cinema. She and cinematographer Wojciech Staron use monochrome to emphasize the disconnection from reality, yet the black-and-white also in turn focuses attention on expressions and behaviour. The Eisensteinian montage, formerly used to depict the struggle of the proletariat, now shows that proletariat as mocking that which seeks to uphold him, through more languid and disconnected imagery. Rather than fast, intercut images, Pakalnina instead shifts to long takes, surveying the landscape and the humans within. Everything becomes grand and monstrous: the camera, the land, and most especially, the people.

This cinematography is complemented by a discordant yet wholly appropriate score. Together, they serve to express a history which is incomplete, falsified, lost and misremembered (or disremembered). This is no breathing room, as there can be no moments of reflection when the facts and truth have been buried in time. An arresting combination of folk tale, homage, criticism and satire, Dawn is a sensorial feast for an audience willing to embrace its eclectisism and absurdity.
Tweet Post Submit

Do you feel this content is inappropriate or infringes upon your rights? Click here to report it, or see our DMCA policy.
Black Nights 2015DawnLaila Pakalnina