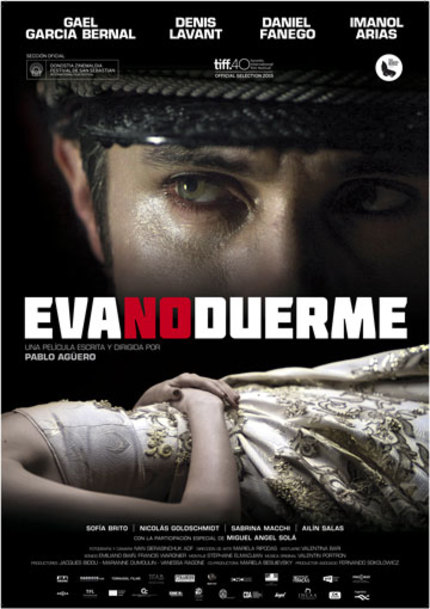 Gael Garcia Bernal and Denis Lavant star in Pablo Aguero's Eva Doesn't Sleep (Eva No Duerme), based on the bizarre true story of the years following Eva Peron's death. Years in which Peron's embalmed body was stolen and hidden around the world for a span of decades. Here's how the Mar Del Plata film festival describes it:

After the death of Eva Perón in 1952, her body was successively embalmed, kidnapped, hidden (in places as unheard of as behind a movie theater screen or at the house of a military man who, in a state of paranoia due to the fear of an operation by the Peronist resistance, ended up killing his pregnant wife), shipped to Europe, returned home and, finally, buried under six meters of concrete. During the two decades the unlikely saga of Evita's body lasted, it was 25 sought by everyone. Agüero, in a move as courageous as it is brilliant, uses the point of view Admiral Massera, played by none other than García Bernal, in order to tell the story (or the myth, both of which seem to coincide more often than usual) as though it were a long dream or, better yet, a long nightmare. Dream or nightmare, like recent Argentine history, which the director of Salamander captures in all its pathos and drama, adding or highlighting a veiled humor and a dreamlike strangeness helped by the film's remarkable international cast and the ominous nocturnal nature.

With local release now approached the theatrical trailer for this one has arrived and looks like striking stuff. Take a look below.