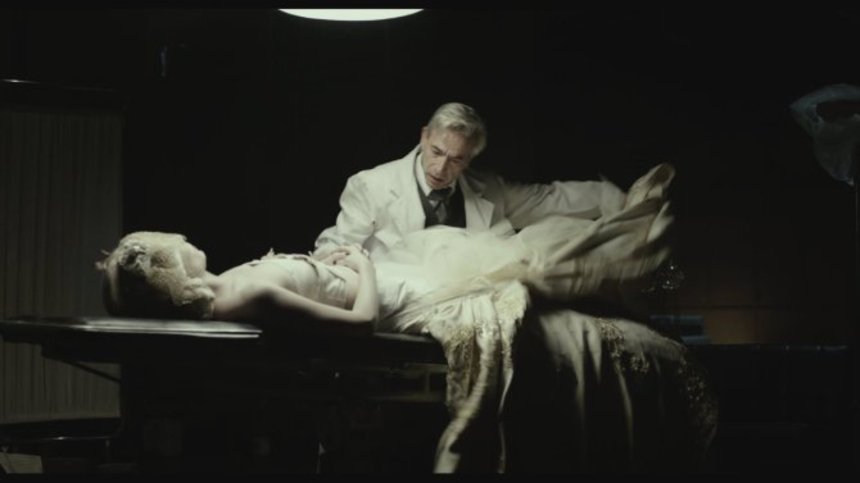 Few politician's wives have been as mythologized as Eva Peron. The wife of the President of Argentina in the late 1940s, she reached iconic status during her life, as a poor girl from the countryside who married well, rose to great power, yet still remained an advocate for the poor and working classes and was reviled by those in power. After her death from cancer at the age of 33, her body lay in state for several days, then after its embalment, went missing for nearly thirty years, and that disappearance was shrouded in mystery.

Pablo Agüero brings this strange tale to life in Eva Doesn't Sleep, which arguable doesn't deal so much in the particulars of the disappearance, as it does in what Eva Peron, or 'Evita', symbolized. For any Argentinian, or anyone with knowledge of Argentinian history, the details might be known; but even for those of us who don't (or only know something from the Broadway musical on Evita's life), it is a fascinating and cerebral contemplation of the nature of iconic figures, what parts of their legacy are taken for granted, and how that legacy can change like a swinging pendulum.

The film begins with a military authority (Gael García Bernal) who makes no qualms about his hatred for the Perons and all they stood for, and his determination to see that Evita's body does not receive the commendation normally afforded to such a figure. The film then weaves its tale through the perspective of the embalmer and a cleaner at the facility; two soldiers (one played by Denis Levant) charged with taking Evita's body out of Argentina; and a member of a former dictatorship kidnapped by a revolutionaries, determined to find out the location of the body.

Each section serves to examine the different parts of Evita's legacy and her meaning to the various citizens. In the first, ther embalmer is determined to treat her body with respect, as he would any, but also to maintain her iconic status; to keep the 'country' part of her face while also serving the elegance to which she rose. For the cleaner, Evita fought for the rights of people such as herself, and she looks on the body with reverence, as if Evita was a goddess. This is emphasized by shots of the body floating in a red embalming fluid, casting Evita as a waternymph, transforming her into an actual mythical creature.

The soldiers' section is by far the most interesting. Koenig (Levant) tries to keep the identity of the body a secret from his young counterpart Robles, but in a private moment, Robles opens the box, recognizes and Evita, and holds the body as if it were both the Virgin Mary and Mary Magdalene, filled with desire and respect. The two men then engage in a conversation while somewhat homoerotically shirtless, which leads to a brawl, suggesting that even Evita's body exudes its power long after her death. But as is also suggested, that has as much to do with the inference of her person by the soldiers as reality.

The third section, loosely based on the actual kidnapping of Pedro Aramburu, whose reign as President saw his attempt to erase all traces of the Peron legacy (from monuments to laws). He is interrogated by Esther, who is at first backlit with a tight bun suggesting she might be a reincarnation of Evita herself, demanding to know the location of her own body, trapped far away from her Argentinian homeland. Aramburu knows no matter what he says, he will be executed, and so he moves between try to maintain his supposed superiority, and desperate and vulgar attempts at escape. Esther tries to appear as mother, daughter, friend, and adversary - again, mimicking Evita's various guises - and Agüero keeps her either in shadow or softly lit, both to maintain the idea of Evita's presence, and the image of Esther at the 'everyman' of Argentina, watching and (not so) patiently waiting to exact revenge for the years of brutal dictatorship.

More an contemplative arthouse film than historical drama, Eva Doesn't Sleep does not attempt to rewrite history or the legacy of Evita; indeed, the film isn't about her. More a collection of stories than a complete narrative, Agüero's film successfully creates an uncomfortable yet compelling tone, one that doesn't require intimate knowledge of the subject (in fact it's almost better not to know too much to be unmarred by history). The somewhat dusky colour and long takes allow the actors to behave as if they were in a theatrical play, giving them space to draw out their own anxieties and supersitions around their mythic Evita, and in turn ask the audience to comtemplate whom them might mytholigize to the point of almost irrelevant personal existence.